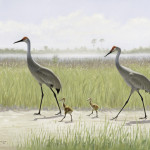 One of the joys of living in the area of Florida that I do is that our communities are all recent construction.  Since the county has recent mandates in place that with new construction a certain percentage of land has to be set aside and designated as wildlife conservation land, we live among conservation land tracks, the largest of which is 80 acres in the center of my community.  There is a small two acre one right across the street from me.  Thus, it is not unusual to see river otters, bobcats, bullfrogs, and all manner of wildlife living virtually among us, the most majestic and beautiful for me are the sandhill cranes.

Sandhill cranes are very large grey birds that have long legs and necks, small heads, pointy beaks, and characteristic red heads.  They stand as large as four feet tall and have up to 7 foot wing spans.  Whether they are in flight or walking across one’s front lawn (a common occurrence, since our cranes are very accustomed to people), they never fail to inspire awe.

One of the most beautiful traits of sandhill cranes is that once mated, they are paired for life, until one mate dies.  Female and male raise their chicks together, and since they commonly have twins, it is not uncommon to see a family of four.  The chicks stay with their parents until they reach adulthood, and then go their own way to find their own mates.

Every spring, we see the adorable little chicks following their parents around, and see their little families grow.  By this time of year, the offspring are a large as the parents, and the only way we can tell them apart from the parents, is that the red coloring of the head has not yet filled in.  We refer to them as “teenagers.”  Unlike human teenagers, however, sandhill crane teenagers continue to following their parents around, learning to forage for food and keep clear of predators.

One day, the teenagers get the red on the heads, while continuing to follow their parents for a time, until one day they are gone in a flash.  Mom and dad cranes remain together, only to repeat the process again in the spring.

So enamored with our cranes, my son’s elementary school adopted the cranes as their official mascot.  I was very proud my kindergartener last year when he won a “Crane With Character Award,” for showing exemplary kindness and courtesy toward his classmates and peers.  A bird so devoted to one another and to their offspring, I believe that my son’s award was aptly named.

One thought on “Bonded For Life”