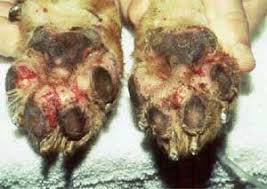 Systemic lupus erythematosus (SLE) is a rare, chronic, autoimmune disease in dogs that is potentially life threatening. The affected canine patient’s immune system behaves abnormally and attacks its own body by forming antibodies against its own cells and tissues. This result is acute and chronic inflammation and potential tissue damage at the level of the skin, heart, lungs, kidneys, joints, nervous system, or blood. In most cases, several organ systems are affected. SLE can be managed, but at this time it cannot realistically be cured. While the disease itself is chronic in nature, disease can remain in a chronic low level to severe state or cause acute, sudden, and unexpected flares. As indicated above, SLE can be potentially managed but not cured, so it will require life long treatment.   SLE is not to be confused with discoid lupus erythematosus (DLE), which is a common skin disease that affects the canine nose.  However, discoid lupus is commonly seen concurrently with SLE.

Diagnosis can be elusive with SLE, as there is not one diagnostic test that definitively confirms the diagnosis.  Diagnosis is generally confirmed via history, presenting clinical signs, 2-3 diagnostic tests, and response to therapy.  Many dogs with SLE will test positive for anti-nuclear antibodies, aka, positive ANA titer.   However, ANA titer is not just specific to SLE and can be positive in cases of other autoimmune disease.  As such, diagnosis is typically confirmed using a combination of a positive ANA test, at least two significant signs of disease, patterns on general blood work that are suggestive of SLE, and biopsy results of skin lesions.

Treatment for Systemic Lupus Erythrematosus in dogs is aimed at suppressing the out of control immune system, reducing inflammation, and controlling pain.  Depending on which organ systems are affected, there may be other treatments that are necessary to stabilize the patient.  For example, for skin lesions that may develop secondary infections, a course of the antibiotic doxycycline is commonly administered.  In cases of heart disease, treatment for congestive heart failure may be necessary….and so on.

For the  immune suppressive and anti-inflammatory side of therapy, corticosteroids (most commonly prednisone) is administered. In severe cases, sometimes a second immune suppressant must be added, such as azathioprine, cyclophosphamide, or cyclosporine. Long term treatment plans depend on what organs are affected and how severely they are affected.  Exposure to ultraviolet rays in sunlight can trigger flare-ups of SLE, so affected dogs should avoid prolonged exposure to sunlight and center most out door activity around dawn, dusk and evening.

Prognosis depends largely on how each dog is affected, what organ systems are affected, and to what degree.  Regardless of severity and presentation, owners of dogs affected with SLE should expect that their pets will require life-long treatment.