The Airedale Terrier was developed over a century ago in the country of York,developed from the ancestral Working Terrier. The Airdale was dubbed “The King of Terriers,” later named Airedale after the Aire in England, an area with an abundant population of small game. Originally, Airedales were known as Waterside Terriers and were used primarily as vermin hunters. The breed was later crossed with the Otterhound to make introduced better swimming capabilities. Airedales are also rumored to have Manchester Terrier in their ancestry. In addition to his role as a small game hunter, the Airedale has also historically been used to hunt big game in Africa, Indian and Canada, and even as police and army sentry dogs in World War II. The modern Airedale is primarily a companion dog, but there are still working lines out there. Some of the Airedale’s talents include guarding, watchdog, hunting, tracking, military work, police work, and competitive obedience.

The Airedale is a very large terrier with a long, wiry hair coat, a long flat head, and a deep chest. Its bristly hair coat is resistant to dampness, but will mat if not stripped periodically. It is a very well balanced dog that stands squarely with a level topline and straight front legs. The ears are small to medium, v-shaped and sit to the side and held slightly forward. The nose is black and held in a level or scissors bite.

The tail is typically docked and carried high. While the outer coat of the Airedale is rough and wiry, the undercoat is soft. The hair coat color is usually black with tan markings. A star on the chest is an acceptable breed characteristic. The legs, chest, undersides, head and ears should all be tan, with the tan color sometimes extending up to the shoulders.

Airedales have a hard, short-haired, double hair coat. The hair should be stripped two to three times a year, but for show dogs, much more intensive grooming is necessary. Excess hair between the pads of the feet should be clipped regularly, as this can be a source of mats. If the coat is kept stripped, it will shed little to no hair, however if the coat is not stripped, shedding will be significant. Burs and food frequently stick in the beard, so constant beard cleaning is necessary

The Airedale Terrier will usually do well enough with children if they have early exposure and socialization to them, but care should be taken with small children, as they may play too rough for very small ones. Airedales are intelligent, playful, courageous, and loyal. 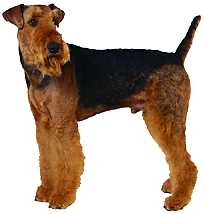 Airedale Terriers are naturally very spirited, energetic dogs who need a lot of work and exercise. If not worked and stimulated mentally enough, they can become very rowdy and destructive in the home. As such, obedience training should be begun as young as possible, and engaged in consistently. Sensitive and responsive, Airedales respond well to training, but can seem stubborn or willful at times resulting from boredom, as they bore easily. Therefore, training exercises should to be varied frequently to prevent monotony. Family members need to be calm but firm with Airedales, as they can exhibit dominance toward family members they see as submissive, which can lead to willfulness or disobedience. This is probably the main reason Airedales tend to have a reputation as being difficult to train. Airedale terriers do best with owners and family members that understand how to be a dominant top dog to an Airedale without being too harsh or overbearing – Airedales do not respond well to harsh or extreme training techniques.

Airedale Terriers generally get along well with household cats and other animals, but they sometimes exhibit dominance aggression toward other dogs.

Airedale Terriers were bred for active work, and therefore require plenty of exercise. They should to be taken for long daily walks, as well as have regular opportunity to run free in a large area. Airedales generally love to play with a ball, swim, and retrieve objects and once full grown, will enthusiastically run alongside a bicycle. Without enough attention and exercise, the Airedale Terrier will become restless and bored and will usually get himself into trouble. The exercise requirement decreases somewhat after the first three years, but the first three years of an Airedale’s life require a lot of work on the part of the human. This dog is by no means a couch potato, but will tend to mellow significantly upon reaching middle age.

The Airedale Terrier is not recommended for apartment life. They are very active indoors and will do best with at least an average-sized yard.

Airedale Terriers are known to be a hardy health breed generally speaking, but have been known to be prone to hip dysplasia.