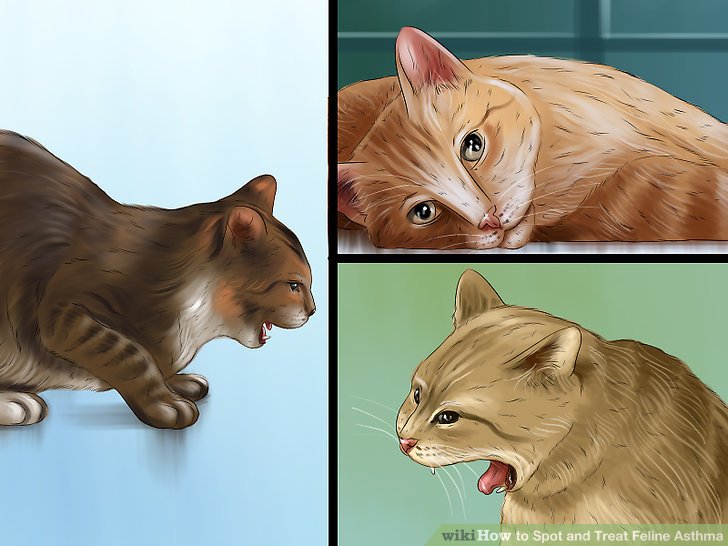 Asthma (most commonly seen in cats) or chronic or chronic allergic bronchitis (commonly seen in dogs) all have varying presentations and clinical appearances, but most certainly share similarities. Both syndromes of the lower respiratory systems fall under the general category of chronic obstructive pulmonary disease (COPD) or are commonly referred to as chronic inflammatory airway disease. The cause of these diseases is allergically stimulated inflammation of the lower airways of the lungs, most often being the result of genetically inherited sensitivities leading to inflammation and subsequent narrowing of the bronchi and bronchioles (tubular structures that move air in and out of the lungs).  This combination of effects results in difficulty breathing.

Cats more commonly have the more characteristic asthma presentation seen with humans that suffer from asthma.  These attacks tend to be episodal in nature and are known to often come on suddenly and severely.  All degrees of asthma exist. In severe cases, coughing, wheezing and exercise intolerance, fainting and even sudden death occur. In these cases, large numbers of bronchioles plug with mucus and the smooth muscle that surrounds the airways go into spasm restricting breathing.  The incidence of the disease seems to be highest in Siamese cats, but it is commonly seen in all breeds and varieties of cats.

Other cats present with more mild cough or wheeze, or appear that they are attempting to hack up a hair ball that never comes up.  Some cats present simply as panting, which is not a normal behavior in cats.  It is estimated that about 1% of cats suffer from asthma.

In dogs with inflammatory lower airway disease, the more common presentation is a chronic, non-productive cough and/or periodic wheezing. The cough is often 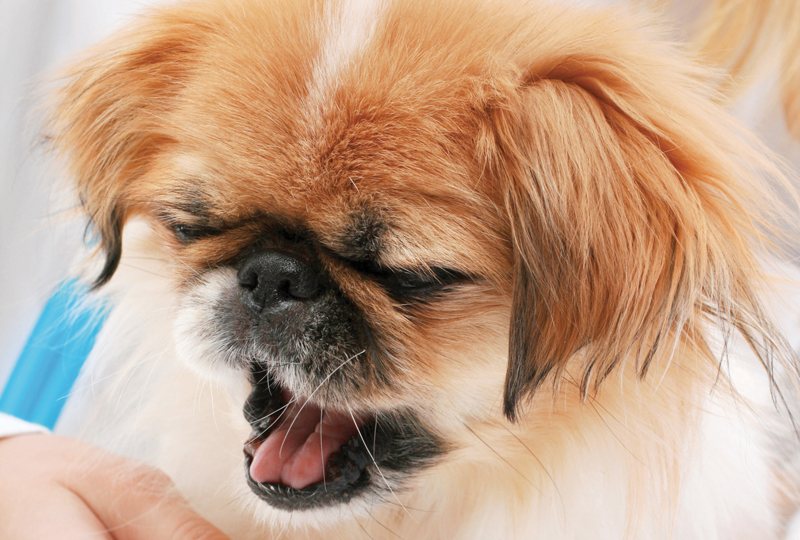 more pronounced at night.  Since the presentation for dogs is not commonly sudden onset and episodal in nature and bronchoconstriction (narrowing of the airways) is not as common, we do not commonly called the syndrome asthma, but instead chronic allergic bronchitis.

The onset of asthma in cats and chronic allergic bronchitis in dogs are commonly triggered by allergens or  – in the case of cats – stress. Some common allergens are grass and tree pollen, smoke, fumes, cigarettes, dust, and aerosols of various sorts such as perfumes, deodorants and flea spray. When susceptible dogs and cats contract bacterial, or viral respiratory disease the problem often becomes considerably worse.

Asthma is diagnosed by physical examination and chest x-rays. Taking the x-ray can be dangerous in an of itself, as the stress of being positioned for the x-ray can send the patient, especially cats, into a crisis. Therefore, I always keep an oxygen machine close by as a precaution when actively coughing or wheezing patients in need of chest x-rays.

Lower airway disease in dogs and cats is diagnosed via characteristically coarse lung sounds noted while listening with a stethoscope and confirmed by chest x-rays.  Dogs and cats affected by lower airway disease commonly have a generalized chest x-ray pattern known as a bronchiolar pattern. If the x-rays are ambiguous or otherwise unconvincing, the patient can be sedated and a trans tracheal wash performed. This is when saline is flushed down into the trachea and aspirated back out. The wash can then be examined under the microscope. A predominance of white blood cells called eosiniphils in the sample is strongly suggestive of asthma or chronic allergic bronchitis.

Treatments for lower airway disease in dogs and cats range from bronchodilators (medications that open the airways), antihistamines, and/or steroids. If a patient is in danger or has an otherwise severe presentation, steroids are usually administered initially to stop the crisis. Later, once the patient has been stabilized and is out of danger, milder maintenance medications can be attempted. In mild to moderate cases, antihistamines such as chlorpheniramine, diphenhydramine, or cetirizine can be effective. Sometimes, concurrent use of a bronchodilator such as aminophylline or theophylline will be needed. In severe cases of asthma in dogs and cats, periodic injections of a long acting steroid or daily maintenance administration of a steroid may be are necessary.

Examples of long acting injection steroids include depomedrol and kenalog.  Duration of relief will depend on the severity of illness.  Example of commonly administered oral steroids for maintenance therapy include prednisone, prednisolone, and medrol.

Prognosis depends on the patient’s severity of disease, and tolerance of any maintenance medications that are necessary to control signs of airways disease.