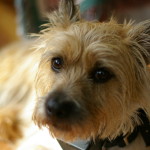 The Cairn originated in the Highlands of Scotland and the Isle of Skye, classified in the Skye terrier group along with the Scottish and West Highland White terriers. Around the early 1900s, the three terrier breeds began to be bred separately, thus beginning the Cairn’s evolution toward becoming his own distinct breed.  The name Cairn refers to the rock dens that foxes and badgers lived in, in which the little terrier dog would crawl into and bark to flush out the animals for a farmer to kill them.

Cairns of today use that tenacity and athleticism to excel in obedience, agility, and tracking competition.   Their thick outer coat makes them cold/harsh weather resistant and thick hair around their head with prominent ears poking up through gives them a foxlike appearance.  The breed standard allows any color coat with the exception of solid white.

Cairn terriers are remarkable little terriers as, unlike many other terrier breeds, they tend to be remarkably tolerant and gentle little dogs.  Thus, for a family with small children seeking an active, fun, little terrier type dog, these would generally be a good choice.

Cairns are very trainable, fast learners due to a generally high level of canine intelligence.  They do require regular brushing, at least once every 2-3 days to keep their hair coats fresh and un-matted, professional grooming at least monthly.

Cairns are about generally about 9-12 inches tall (at the shoulder) and will vary from 11-15 pounds.  They fit well in apartments and small houses with minimal yards, but daily exercise is very important.  Ideally, at least a small yard would be advisable, but if this is not possible, regular walking and trips to the park would suffice.

Cairns often cannot shake their original purpose to flush out pests, so  pocket pets are not advisable in a home with Cairn terriers.