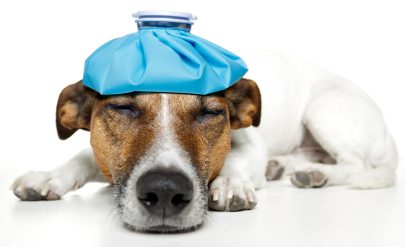 Canine influenza H3N8 virus originated in horses and through random mutation, jumped species and spread to dogs and can now be spread between dogs. The H3N8 equine influenza (horse flu) virus has persisted in horses for over 40 years. In 2004, however, cases of an unknown respiratory illness initially in Greyhounds were reported in the United States. Epidemiological investigation determined that this respiratory illness was caused by the equine influenza Type AA H3N8 virus. Scientists concluded that this virus  has adapted to cause illness in dogs and spread among dogs, especially those housed in kennel and shelter environments. This is now considered a dog-specific, canine, H3N8 virus. In September 2005, the virus was identified by experts as a newly emerging pathogen in the dog population in the United States.

The H3N2 canine influenza virus was an avian flu virus that adapted to infect dogs. Although H3N2 viruses have been reported to infect cats, dog flu is primarily a disease of dogs. This virus is separate and distinct from human seasonal H3N2 viruses that infect people. Canine influenza A H3N2 virus was first detected in dogs in South Korea in 2007 and has since been reported in other regions of Asia, including China and Thailand. H3N2 canine influenza has reportedly rarely infected some cats as well. It was first detected in the United States in April 2015. It is not exactly known how canine H3N2 virus was introduced into the United States.

Most dogs infected with flu recover within 2 to 3 weeks. However, some dogs may develop secondary bacterial infections which may lead to more severe presentations of illness and pneumonia. Anyone with concerns about their pet’s health, or whose pet is showing signs of canine influenza, should contact their veterinarian immediately.

The percentage of dogs infected with dog flu that die is very small. Some dogs have asymptomatic infections (no signs of illness at all), while others present with severe infections. Severe illness is generally characterized by the onset of pneumonia or bronchial pneumonia.

All dogs are susceptible to canine flu infection, and illness most commonly spreads among dogs housed in kennels and shelters. Canine flu can spread to other dogs by air borne respiratory secretions as the result of coughing and sneezing from infected dogs, by uninfected dogs coming into contact with contaminated objects, and by moving contaminated objects or materials between infected and uninfected dogs. Therefore, dog owners whose dogs are coughing or showing other signs of respiratory disease should refrain from exposing their dog to other dogs. Clothing, equipment, surfaces, and hands should be cleaned and disinfected after exposure to dogs showing clinical signs of respiratory disease.

Testing to confirm H3N8 and H3N2 canine influenza virus infection in dogs is available. However, testing take several days and is expensive.  Since treatment must be initiated immediately and given that confirming the diagnosis does little to affect the clinical outcome or treatment course, the majority of owners opt against treatment.  As a result, there are many unreported cases because of lack of confirmation and outbreaks are subsequently more wide spread than the data suggest.

Treatment largely consists of supportive care. This aids the canine patient in mounting an immune response to fight the disease. In milder form of the disease, this care may include medication to make your dog more comfortable and fluids to ensure that your dog remains well-hydrated. Broad spectrum antibiotics may be prescribed by your veterinarian if a secondary bacterial infection is suspected.

Vaccines are available in the United States for both the H3N8 and H3N2 strains of canine influenza. Your veterinarian can provide you with additional information about the vaccines and risk assessment for your dog based on life style and presence (or lack thereof) of current outbreaks.