Epitheliomas in dogs and cats fall into a category of benign (not cancerous) tumors of the glands of the skin. These tumors are often pink and wart-like, but they are far from warts, as warts have an infectious viral cause. Epitheliomas occur very commonly in middle aged to senior aged dogs and occasionally in cats.

Specifically, sebaceous epitheliomas grow out of the sebaceous glands of the skin. As such, they can apear on any part of the body that is covered with skin. They tend to look like pink warts on affected dogs and cats, and typically do not grow any bigger than 1/2 cm in diamater. Sometimes, they are more pigmented, taking on a darker or even black appearance.

Another common type of epithelioma is the mybomian gland epithelioma found commonly growing from the margin of the eyelid. Like their sebaceous skin counterpart, they also take on the look of a wart, but tend to more commonly carry pigment, making them generally darker in color.

Epiltheliomas are usually just a cosmetic problem, since they are not a form of malignant cancer. However, the growths on the eyelids of dogs and cats (more commonly in dogs), can irritate the cornea, and/or lead to chronic conjunctivitis or even corneal ulcers.

They are also sometimes in places where they are easily traumatized (or chewed on by the pet) and bleed or become infected frequently. These would be justifiable medical reasons to remove the growths.

A small percentage of epitheliomas of canine and feline skin/eyelids are malignant (cancerous), and known as adenocarcinomas. That is why it is always advisable to have even a suspected benign sebaceous epithelioma checked by a vet. Sebaceous adenocarcinomas can look very similar to benign sebaceous/mybomian skin tumors in dogs and cats, especially in the early stages. Rapid changes in size, color and shape, as well as a tendency to itch and bleed frequently, are all signs of malignancy. 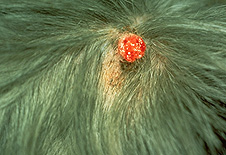 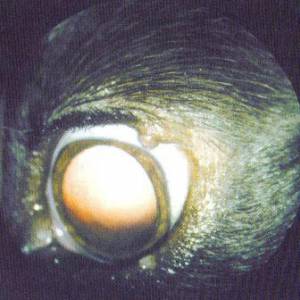