Lick granuloma (focal furunculosis) is a common, stubborn skin disease that is directly caused by the dog licking an area of the body, usually the lower leg. Lick granulomas may be mistaken for growths or granulomas formed around imbedded foreign objects.

Both males and females can develop lick granulomas, but males seem to have a higher incidence. Any age dog can be affected, but middle aged to old dogs are more susceptible. Breeds commonly affected include (but are not limited to): Doberman, German Shepherd, German Short Haired Pointer, Golden Retriever, Great Dane, Irish setter, Labrador retriever, and Pointer.

Signs of lick granuloma include hair discoloration, hair loss, skin sores, hyperplasia (an abnormal increase in the number of normal cells), fibrosis (formation of firm fibrous connective tissue), lameness caused by the growing lesion, and growth of the underlying bone. The lesions are usually solitary, but they can occur on more than one limb at the same time, especially in allergy prone dogs. The areas most frequently affected are the front and sides of the lower legs. In less common cases, lick granulomas can occur in the flank or at the base of the tail.

Treatment of lick granulomas must be aggressive and consistent from the beginning, or they can be very difficult to clear. First and foremost, the dog must be kept from licking the lesion by wearing an elizabethan collar. The affected limb should receive Epsom Salts soaks 3 times per week, as well as be cleaned daily with benzoyl peroxide wipes (such as Stridex pads). The patient should also be treated with 6-8 weeks of antibiotics to control infection, which is an integral component to these lesions. I also recommend concurrent maintenance with an antihistamine to control allergy stimulated inflammation, often the primary predisposing factor in the development of lick granulomas.

Recently, there has been a lot of anecdotal reports on the benefits of therapy laser in the hastening of resolution of these lesions.  Therapy is an especially attractive alternative to surgery in cases of very difficult and severe lick granulomas, as it is minimally invasive and less costly than surgery.

These lesions are common in dogs, but rare in cats. If you see lesions like this on the limb or between the toes of a feline, the more likely culprit is Eosinophilic Granuloma. 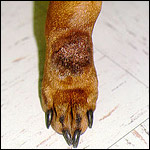 One thought on “Lick Granuloma”