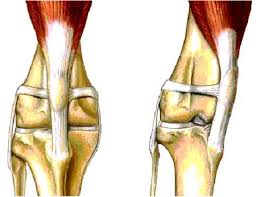 Medially luxating patella is a condition where the patella (knee cap) pops in and out of place in response to extension, flexion, or weight bearing of the knee joint. The disease is congenital in origin, resulting from inherited shallow patellar grooves (the groove in which the patella normally sits in), an inherited abnormally medially located tibial attachment point for the patellar tendon or both. The luxations almost always occur in the medial direction (toward the center of the body). For example, in the left limb, the tendency is for the patella to luxate to the right. The opposite is true for the right limb. The majority of luxating patella cases are bilateral.

Luxations cause inflammation and pain in the knee joint. Also, because the chief purpose of the patella is to redistrubute tendon forces to best handle weight bearing and stress, patellar luxations tend to throw off the physics of the entire leg, causing excessive wear on the hips and ankles. This predisposes to degenerative joint disease in these other joints. What’s more, over time, as the luxations occur, the medial ridge of the patellar groove becomes worn, increasing the frequency of luxations. Eventually, if left untreated, the disease can progress to the point where the patella spends all of its time out of place. Patellar luxations are graded on the following scale:

Medially luxating patella most commonly occurs in toy to small sized dogs. However, the disease is occasionally reported in larger dogs and in cats. Treatment is surgical and geared toward deepening the patellar groove and anchoring the patella laterally. The most accepted surgical approach in small dogs is known as the trochleoplasty, tibial tuberosity transposition.

Deepening of the trochlear groove, or trochleoplasty, can be accomplished with a variety of techniques. A chondroplasty technique involves cutting out a taco-shaped wedge of cartilage, removing a small portion of bone beneath it, and then replacing the cartilage. The result is a deeper groove. This procedure can only be performed on very young dogs, because their cartilage is thicker.

Trochlear recession involves cutting out the cartilage and bone in such a way as to create a deeper trough. This trough will then fill in with scar tissue over time. Because this scar tissue is not as good as cartilage for joint function, this technique has given way to others that attempt to preserve normal cartilage. It can, however, be useful in carefully selected cases.

The kneecap attaches to the lower leg via its patellar tendon at a bony site called the tibial tuberosity. Many times this site forms abnormally on the inside, as with MPL, or on the outside, as with LPL. In this procedure, the surgeon moves the tibial tuberosity back into proper alignment and secures it in place with a pin or wire. Realigning the joint, kneecap, and tendon prevents dislocation from recurring. 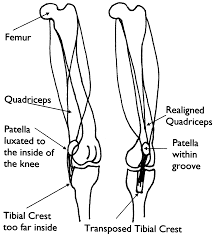 Osteotomy
In severe cases, with malformation of the tibia or femur, corrective bone cuts known as osteotomies may be required. 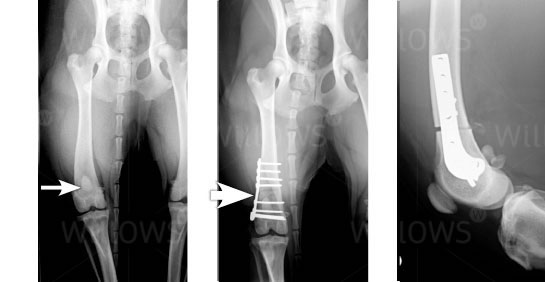 Prevention:
Early detection and correction is the best way to prevent severe lameness and dysfunction. Breeding affected animals should be discouraged; however, the disease is so prevalent in some breeds that this may not be practical.

Photobiomodulation also dilates veins and venules, as well as lymphatic vessels.  By stimulating venous circulation, this helps to stimulate the removal of inflammatory debris and stagnant blood in a compromised areas.  By dilating lymphatic vessels, we potentially stimulate the drainage and replenishment of interstitial fluid, the liquid medium cells and tissues of the body are housed within.

Therapy laser also stimulates the production of adenosine triphosphate (ATP) within cells.  ATP is the powerhouse of the cell by from which it derives energy to perform its physiological functions.  By increasing ATP within cells, therapy laser serves to provide cells a jolt of energy in the form of increased ATP to enhance cellular repair and the rebuilding of tissues.  Protocols vary, but I generally recommend 6 treatments directly over the incision over a course of 3 weeks.

Water treadmill is a device where a treadmill is housed within a tank that is filled with warmed water.  As the tank is partially filled up to about the level of the dog’s chest, the resulting buoyancy lightens the dog’s weight bearing, making them more accepting of consistent use of the limb.  The warmed water has a hydrotherapy effect that enhances wound healing via increase of blood circulation, while also providing resistance in multiple planes of motion to rebuild muscle and strengthen muscular, tendonous, and ligamentous stabilizers.

A hyperbaric chamber creates a pure oxygen environment.  It has notable efficacy in the management of burns, contaminated wounds, surgical incisions, and many other clinical applications where high levels of oxygen are beneficial in restoring cellular and tissue integrity following trauma or conditions that lead to cellular and tissue damage.  In the case of orthopedic surgery, hyperbaric chamber therapy reduces the incidence of post-operative infection while hastening incision healing and minimizing scar formation.

These injections reduce cartilage degradation, block inflammatory mediators within joints that cause inflammation and pain, and contribute to the building and restoring of cartilage.  Courses of injections will vary, but I generally recommend 6 injections over the course of 3 weeks.

16 thoughts on “Medially Luxating Patella In Dogs And Cats”