Megaesophagus is the most common cause for regurgitation in the dog. Regurgitation results from the inability of the esophagus to contract properly and propagate the food down to the stomach. As a result, the ingested food and/or liquid remains in the esophagus, for anywhere from minutes to hours to days. With the food not reaching the stomach to cause the sensation of being full, the dog will continue to eat. As a result, the esophagus often enlarges as it dilates greatly with food, hence the name of the disease. The majority of cases of canine megaesophagus have no apparent cause, and are therefore given the name, idiopathic megaesophagus. A minority of cases are caused secondary to underyling disease, namely hypothyroidism or mysthenia gravis, and are thus called acquired secondary megaesophagus.

A very rare congenital disease, called a vascular ring anomaly is also possible, but these are usually seen only in very young puppies. The typical age of onset of canine megaesophagus is 7 – 15 years of age according to many sources, but I have not uncommonly seen it in young dogs 1- 5 years of age. I have heard of cases of canine idiopathic megaesophagus in puppies, but have not personally seen any such cases. Clinical signs of megaesophagus will vary depending on severity and may include: regurgitation that may begin minutes to several hours after eating or drinking, excessive salivation, mild to moderate weight loss, coughing, or wheezes. Some affected dogs present with pneumonia, secondary to aspiration of regurgitated contents. This is perhaps the most dangerous consequence of the disease.

The diagnostic work-up for megaesphagus begins with chest x-rays. The x-rays may show the esophagus dilated with food and will determine whether or not there is secondary aspiration pnuemonia. In some cases, the nature of the ingested material does not allow for visualization of a dilated esophagus. If the history fits mega-esophagus, but a dilated esophagus is not seen on routine x-rays, then a contrast study can be performed, where prior to the x-ray, a radio-opaque liquid is swallowed. Since the liquid will show brightly on the x-ray, the integrity and shape of the esophagus will be clearly visualized.

Once it is clearly established that a patient indeed has canine megaesophagus, then the dog must be stablized, and any secondary aspiration pneumonia treated. In addition, it is necessary to differentiate between idiopathic and secondary acquired megaesophagus. A routine profile should be run, constisting of a CBC, chemistry, and urinalysis. In addition, a thyroid profile should be run (TSH, T4, free T4), as well as a test for myesthenia gravis (acetyl choline receptor antibody test).

If the megaesophagus is ultimately acquired secondary, then the primary disease should be treated. Please refer to our Diseases A-Z page provided for more information regarding the treatment of hypothyroidism or myesthenia gravis.

In cases where it is determined that the patient has idiopathic canine megaesophagus, that is, megaesophagus of unknown origin, then husbandry becomes the primary focus in managing the disease. Pro-gastrointestinal motility drugs, such as cisapride and metoclopramide have been used to attempt to incrcease esophageal tone, with little to no success in most cases. I have personally had no success using these drugs to manage the disease.

The main thrust of husbandry management of canine megaesophagus is feeding and watering from elevated dishes. By elevating the food and water, gravity helps to facilitate the passage of food from the esophagus to the stomach. The dishes should be elevated to a height where the dog can just barely reach the bowls, making certain that the dog really has to extend the neck to eat or drink.

In severe cases of canine megaesophagus, even this type of feeding is not enough to prevent chronic regurgitation. For these patients, one can try feeding and watering with dishes placed on top of a step ladder, high enough that the dog has to place the paws on the step ladder in order to reach the food. This serves to orient, not just the neck, but the dog’s entire body in a vertical position to eat and drink from. If the case is so severe that even this does not work, one can obtain special blueprints to construct a special “megaesophagus chair” that the dog can be trained to eat from. I do not have any such blueprints, but clients of mine have found them, among other very helpful tips on a megaesophagus online support group. 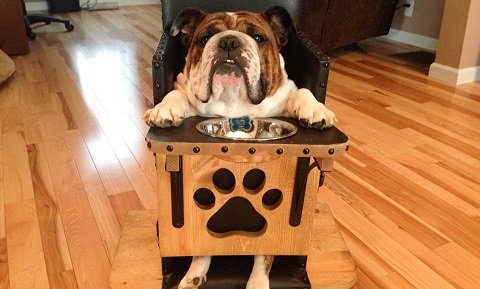 As far as what type of food to feed, dry food is out of the question. A high calorie, high protien canned food (such as a goodcanned puppy food) should be feed in very small amounts frequently throughtout the day. Some patients do better with the food pureed into a liquid, while other do better with the food rolled into small meatballs. Water should also be offered in small amounts frequently. In patients that have trouble with liquid water, you can try offering a crushed ice slush.

The prognosis for canine megaesophagus is guarded, with a great deal depending on severity of disease, the dedication and cooperation of the affected patient’s family, and how effective the dog’s feeding and drinking habits can be regulated and monitored. As stated before, the most dangerous complication of canine megaesophagus is secondary aspiration pneumonia.

56 thoughts on “Megaesophagus in Dogs”