Melanoma In Dogs And Cats

Melanoma is a moderately common, locally invasive and frequently malignant cancer in domestic dogs and cats. We see it less commonly in cats than dogs, but it still has a significant prevalence in the feline species. There are several forms of melanoma, which typically are classified by their location. These include tumors that tend to localize in the skin (cutaneous melanoma), eyes (ocular melanoma), nail bed (subungual melanoma) and oral cavity (oral melanoma).

The causes of melanoma in dogs and cats are not fully known, but the skin form seems to be over-represented in white colored dogs and cats, so like people, less protective pigment of the skin and hair seems to increase cellular mutations from UV light, and lead to melanoma more commonly. Where melanoma differs significantly from melanoma in people from dogs and cats, however, is that black dogs and cats also seem over-represented, which is contrary to one one would expect. The fact that some domestic dog and cat breeds are more commonly affected by melanoma also suggests that there is a genetic component to the disease.

Canine and feline melanoma is difficult and in some cases impossible to prevent, because veterinary medicine has yet to fully identify its underlying cause. Given the over-representation of white colored dogs and cats, especially those with very short hair coats, it would be wise to limit prolonged sun exsposure n these animals. Recognition of melanoma and early detection remain our best method to combat this disease. Given the suspected genetic contribution to this disease, affected animals probably should not be bred. However, with early detection, the adverse effects of melanoma may be manageable. Dog and cat owners, especially those with predisposed breeds, should familiarize themselves with the symptoms of melanoma and should perform routine, hands-on examinations of their pets to identify any suspicious lumps or bumps at the very earliest opportunity. These should be examined by a veterinarian as soon as they are identified.

Currently, there is no vaccine proven to prevent the occurrence of canine and feline melanoma, although there is a vaccine that is licensed for dogs only, to help treat the condition by prolonging survival rates and minimizing clinical signs of the disease. The license is conditional at this time and not readily available to all practitioners. Its benefit is still questionable and also remains very expensive – too much so for many dog owners. 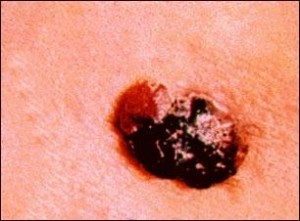 While surgical removal is the most common treatment for melanoma, the tumors tend to recur in the same or in other areas post-operatively. Metastasis (spread to other tissues) is suspected to be present in 85% of cases at time of diagnosis. Chemotherapy has been shown to effectively increase survivial rates following surgery, but not significantly so, only a matter of months at this time. Early detection remains our best weapon against this disease.

18 thoughts on “Melanoma In Dogs And Cats”