Separation anxiety is when a dog or cat develops severe destructive behavioral tendencies when left alone. Far more common in dogs, the separation anxiety patient typically begins to exhibit severe anxiety within a short period following the owner’s absence, ranging from immediate to 45 minutes after departure. Common anxious and destructive behaviors include: digging, chewing, and clawing at doors to escape, loudly vocalizing, and urination/defecation in the home, although the pet is fully housetrained.

-A dog that has spent a long interval of family/owner time traveling together, such as
vacation.

-A sudden change in the structure or routine of the home, such as divorce, a child leaving for college, or less frequent walks/attention, move to a new home, or change in owner work schedule.

– Sporting dogs that are bred for intimate interactive activity with the owner, such as Golden Retrievers and Labrador Retrievers, seem especially prone to separation anxiety.

-Separation anxiety in cats makes seemingly no sense, as they are by nature solitary creatures.

-The behavior occurs exclusive when the pet is left home alone

-The pet has a tendency to follow the owner to every room when the owner is home.

-The behavior always or almost always occurs when the pet is left at home.

-The pet exhibits excessively frantic greeting behavior when the owner returns to the home.

-The pet reacts with major excitement or anxiety when the owner is preparing to leave the home, e.g., grabbing the keys.

Once it is determined that a pet indeed suffers from separation anxiety, then one can try applying the following behavioral desensitization techniques to help reduce the dog’s or cat’s stress when left alone:

-Starting 30 minutes before departure, do not pay the dog or cat any attention, positive, negative, or otherwise.

-Do not make a big deal about leaving by saying goodbye to the dog or cat, or acknowledging in any manner.

-When returning to the home, do not greet the dog or cat for 30 minutes, despite their enthusiastic attempts to get your attention. Once the dog or cat calms down, lays down or sits, then approach to offer attention – always on your terms, never the result of the pet begging for it.

-Leave a t-shirt or other clothing item that contains your smell on the bedding or in the crate of the dog or cat.

-Playing soft music in the home when one is away often helps to relieve separation anxiety in dogs and cats.

-Vary departure activities by doing things in different orders. For example, instead of grabbing one’s keys after eating breakfast, just before leaving, try grabbing the keys, sitting to eat breakfast, then leaving

-Exhibit departure activities when not leaving the home. For example, grab your keys, then sit and watch television, or put on your shoes or jacket, then go on the computer in lieu of leaving.

-Exercise the dog or cat as much as possible – in the case of cats, toys/scratching posts, let it outside in a screened in porch or lanai; in the case of dogs, walks, runs, and swimming. 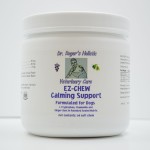 The following are commonly attempted solutions by owners to help manage separation anxiety in their dogs and cats that are not only ineffective, but some will often worsen the separation anxiety. Be sure to avoid the temptation to try these things:

-Punishment/scolding when returning home to find a mess.

-Getting another dog or cat as a companion for your current pet.

-While training for dogs and cats is always a good idea, obedience training will not help to treat separation anxiety.

-Crating: this may help to keep your home safe, but your pet still suffers with anxiety every time you leave the home.