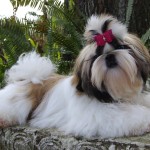 The Shih Tzu dog breed has been cherished by Chinese royalty as prized house pets for over a thousand years.  It is believed that the Shih Tzu descended from crossing the Lhasa Apso or Tibetan mountain dog, with the Pekingese. The Shih Tzu was the prominent house pet for most of the Ming Dynasty and was first introduced to the West by English soldiers during World War II.

A compact and solidly built dog, among his most distinctive feature is his long, flowing double coat. The word Shih Tzu means “lion” and although this dog breed is generally gentle and playful, he will not hesitate to stand up for himself when feeling threatened. One of the most popular dogs in the United States, the Shi Tzu has a distinctively regal carriage with head up and tail curved over the back.   Shih Tzus come in a variety of colors and patterns.

The Shih Tzu is within the Toy Group classification, ranging in size from 8 – 12 inches tall and 10 – 17 pounds.  The sole purpose of the Shih Tzu is as a companion, house pet; a trusting, playful and loyal addition to a household.

Shih Tzus require minimal exercise and work well as apartment dogs or in in small houses with minimal yard space.  Their highest maintenance area is their long, flowing hair coat, which requires frequent (at least every other day) brushing and monthly professional grooming.