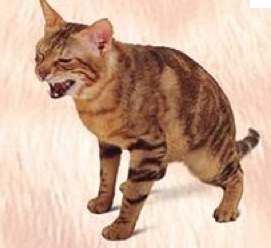 URINARY BLOCKAGE IS AN EMERGENCY

Signs of feline lower urinary tract disease include straining to urinate, bloody urine, unusually frequent urination, etc. If the cat is a male, he is at risk for an especially life-threatening complication of this syndrome, the urinary blockage.

Mucus, crystals and tiny bladder stones can clump together to form an actual plug in the narrow and twisting male cat urethra. The opening is so small that it does not take much to completely or partially obstruct urine flow. Only a few drops of urine are produced or sometimes no urine is produced at all.

It can be difficult to detect when a cat is actually blocked versus when he is not as the inflammation, urgency, and non-productive straining can look identical in either case. The easiest way to tell is by actually feeling in the belly for the presence of a distended bladder. It is often the size of a baseball and about as hard and firm as one if it there is an obstruction. (Unobstructed bladders are usually soft like partly filled water balloons and non-obstructed inflamed bladders are usually either very small or empty). Still, while this size and texture difference is obvious to the veterinarian, most pet owners are unable to feel for the bladder correctly. If there is any question about whether a male cat is blocked, a pet owner should not hesitate to take him to the vet for evaluation ASAP.

The veterinarian will feel the bladder in the abdomen and attempt to express urine from it. Gentle, uniformly applied pressure will sometimes expel the obstruction but usually the feline patient will require more aggressive means of relief. The blocked cat will be assessed for dehydration and toxin build up, as urinary toxins that build up in obstructions commonly cause vomiting, nausea, and appetite loss. They can also cause life-threatening heart rhythm disturbances, so the patient is assessed for all these potential complications.

A partial blockage can be just as serious as a complete blockage, and therefore must be addressed just as aggressively. Treatment is typically the same.

If the blockage persists for longer than 24 hours, urinary toxins will have started to build up in the system, and the kidneys could begin to become compromised.

The single most important goal for the obstructed cat is to have the blockage removed. This is accomplished by placing a urinary catheter through the urethral opening and either through the obstruction itself, or using pulses of flushing solution to move the plug back into the bladder where it can later be dissolved. This procedure is often painful, so sedation is usually needed; however, the risks of sedation in the face of urinary toxin build up must be weighed against the need for pain relief. Rarely, some cats are unblocked without sedation, while most are unblocked with varying degrees of difficulty. Some cats cannot be unblocked at all, and must therefore have an emergency perineal urethrostomy to re-establish urine flow (see below for details on this surgery ).

Fortunately, the majority of cats are successfully unblocked. The urinary catheter is sutured in place and will stay in place for 24-48 hours. Often a urinary collection bag is attached to the catheter so that urine production can be measured quantitatively. Sometimes, the bladder is filled with sterile fluid and flushed out to remove crystals, inflammatory debris, and blood. When the blocked cat has filled his bladder to capacity, his kidneys may stop making urine as there is no where for it to go. Once urine flow returns, the kidneys quickly begin to correct the metabolic incidents that have been taking place. Often an extremely sick blocked cat can be brought back by having proper fluid support and by re-establishing urine production. It is remarkable how efficient the working kidneys can be in restoring the body’s metabolic balance; still, it is important to realize that this is a very serious condition and not every cat can be saved.

Occasionally a cat is brought in soon after blocking and achieves an excellent urinary stream immediately following unblocking. These cats may be able to proceed with treatment without having to spend time in the hospital or without having to have the catheter sutured into place. Most blocked cats do not fit into this category but some cats are able to avoid more aggressive treatment.

In the event of extreme budget limitations on the owner’s part, a blocked cat can be unblocked quickly and returned to the owner for aftercare. This is not ideal, as the cat is likely to need additional support for the best chance of survival, but the attending vet must work within a pet owner’s budget

The kidneys do most of the work during the recovery phase, aided by antibiotics and supportive fluid therapy. The cat must wear a special elizabethan collar to prevent biting at or removing the crucial urinary catheter. Urine production is monitored closely as after the obstruction is relieved, with dramatic urine volumes often produced. (This is called post obstructive diuresis, and if the cat is not drinking on his own, it is crucial that his fluid therapy matches the volumes produced as urine. If they do not, dehydration will ensue.) Fluid therapy is ideally given intravenously, but can be given under the skin, depending on the degree of support needed by the cat and the owner’s budget. Medications are given to control pain and relax the irritated urethra.

After 24-48 hours of catheterization, the catheter is removed and the patient is observed for re-blockage. He will not be allowed to go home until his urine stream seems strong and relatively easy. Some cats may leak urine at this point, as it is painful for them to engage in normal pushing; this is generally a temporary problem. Once he seems to be urinating reliably on his own with ease, he will be released for outpatient home care.

Under ideal circumstances, owners can learn how to feel the abdomen for the presence of the firm obstructed bladder. Realistically, this is hard to teach at discharge mostly because at this point, the cat is pretty sore and teh bladder is empty. There will usually be medications and dietary recommendations to go home with the cat geared toward controlling cyrstal production, pain, and infection.

It is especially important to realize that the cat is at risk for re-blocking for 7-14 days from the time of discharge. This is because the urologic syndrome that led to blocking in the first place is still continuing and as long as the episode continues, blocking is a possibility.

At home, the same straining and bloody urine may still occur. It is important for the owner to be aware of urine volume being produced and of bladder size, if possible. Any loss of appetite or vomiting should be reported to the veterinarian at once. If there is any concern about reblocking, the veterinarian can determine fairly easily if the cat has re-blocked.

The majority cats recover uneventfully and most do not need continuationg medication after they have recovered. Some cats, especially if they have blocked before, may require on-going treatment.

Occasionally the bladder over-stretches while it is blocked and is permanently damaged and unable to empty efficiently. Such cats require special medication to help them contract and empty their bladders normally. Thankfully, this is rare.

Urinary blockage is almost exclusively a problem of male cats with few rare exceptions. This is because the female urethra is shorter and wider, less apt to obstruct. When urinary blockage becomes recurrent in a male cat, it becomes imperitive to consider surgical reconstruction of the genitalia to create a more female-like opening. This surgery is called the perineal urethrostomy or “PU” for short. Basically, the penis is removed and a new urinary opening is made.

The following are important pre-operative oncisderations:

This surgery is done to prevent obstruction of the urinary tract, but it does not prevent feline lower urinary tract disease. This means the cat is likely to continue to experience recurring bouts of bloody urine, straining etc. He just will not be able to block and complicate the situation.

Cats with perineal urethrostomies may be predisposed to bladder infections and infection related bladder stones given the new shorter, wider urethra facilitating ascending bladder infections. As such, it is generally recommended that long term, the cat have 2-3 times yearly urine cultures performed.

The metabolic complications from the urinary blockage should be resolved before the surgery is performed. In some emergency situations this may not possible (the male cat cannot always be unblocked with a urinary catheter and a new urinary opening may have to be constructed immediately). Residual urinary toxin build up is an important risk factor that should be resolved or minimized if possible.

Shredded paper or pelleted newspaper litter should be used during the 7-14 days following surgery. Clay and sand litter may stick to the incision and disrupt healing, or predispose to infection.

The most serious complication that can occur post-operatively is scar (stricture) formation. This causes a narrowing of the urinary opening and the surgery may have to be revised surgically.