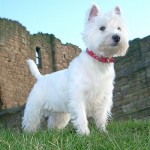 The West Highland White Terrier is more commonly known as the “Westie,” known for its friendly, outgoing demeanor, strong-willed personality, sturdiness, and a bright white hair coat.  The Westie lives up to up to a typical terrier image, possessing a great deal of spunk, determination and devotion all stuffed into a sturdy, compact little body.

The Westie was original bred to vermin hunting and control, but the modern Westie excels in a number of AKC and other kennel club competition from conformation, to agility and obedience.   Most commonly, however, Westies are just fun, playful, affectionate little house pets, bringing joy to households all over the U.S. and Europe.

The Westie is affectionate, loving of people, and playful, a great addition to any family.   While they are generally considered one of the more tolerate terrier type breeds with regard to small children, caution should always be taken, because occasionally Westies are more terrier like than others and may be less tolerant of small children.  Caution should also be taken in households with pocket pets, as some Westies may be so true to their original nature that they cannot resist the temptation to hunt them.

A devoted, happy, and faithful dog, the Westie also makes an ideal travel companion due to its small, compact size. Their hair coats are a combination of a soft dense undercoat, covered with a rough outer coat. At least every other day brushing is required to maintain an optimal hair coat, as well as at least once monthly professional grooming.

The West Highland White Terrier is in the Terrier Group, recognized officially by the AKC in 1908.  Height at the shoulders ranges from 10-12 inches, and the hair coat is solid white.