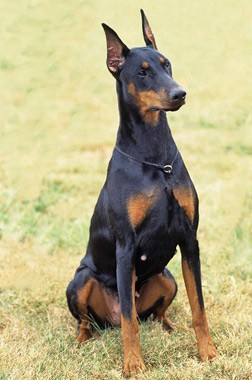 Dilated Cardiomyopathy is a deadly disease of the heart that has strong genetic roots in certain large and giant dog breeds, among them, Doberman Pinschers.  Dilated cardiomyopathy (aka., DCM) is a disease of the heart muscle that is characterized by an enlarged heart that does not function properly. With DCM, both the upper and lower chambers of the heart become enlarged, with one side being more severely affected than the other. When the ventricle, or lower chamber, becomes enlarged, its ability to pump blood out into the lungs and body diminishes. When the heart’s ventricle does not pump enough blood into the lungs, fluid begins to accumulate within the lungs. An enlarged heart soon becomes overloaded, and this leads to congestive heart failure.

In the past all we had to combat DCM was to carefully examine a puppy’s parents for having been properly been heart certified prior to breeding.  Even then, while the parents may not be showing signs of disease, they could still be genetic carriers that combine by chance to genetically manifest the disease in their offspring.  Thankfully, a new genetic test for DCM exists at Norther Carolina State College of Veterinary Medicine that successfully genetically screens Doberman Pinscher dogs for having inherited the genetic predisposition for the development of DCM.

Testing should therefore begin as the dog approaches his/her third birthday.  Here are the recommended guidelines:

Dog positive for DCM1 only:

Beyond early intervention to save and prolong lives, DCM genetic testing also has far reaching implications whereby, if prospective dog owners hold breeders accountable to doing their due diligence in proving that neither parents is a carrier for DCM1 and DCM2, within only a few generations, the disease could be eradicated from whole lines of Doberman Pinschers.

What’s more, NC State is currently working on expanding their genetic testing for DCM into other breeds genetically prone to the disease, such as Great Danes and Irish Wolfhounds.