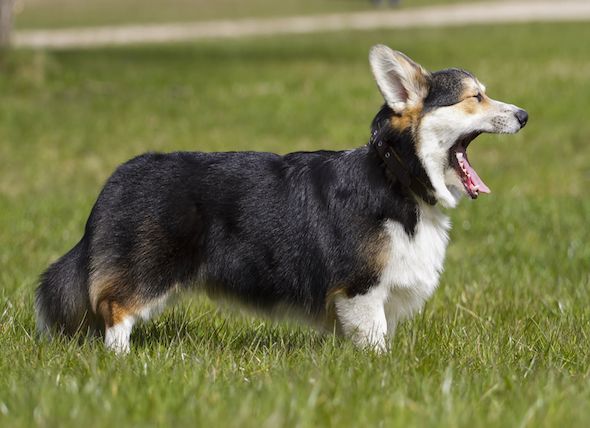 This could affect any breed of dog but most commonly occurs with our little guys.  They present with a chronic (often hacking cough) yet their temperature is normal, their lymph nodes in their neck are normal size, and their lungs are clear.  Many of these dogs also experience which is commonly referred to as a “reverse sneeze,” although the nerd in me always gets annoyed to hear that terminology because it make zero physiological and anatomical sense 9it is actually called a nasopharynngeal spasm…like I said, NERD).  Chest x-rays are usually normal in these little canine patients as well.

Anyway, I cannot find anything wrong with your coughing, gagging dog, so it must be your imagination.  Just kidding, I actually completely believe you; especially because you just showed me evidence of it on your smart phone (technology is wonderful!) video.

The condition is usually undetectable because  the inflammation lies within a thick, cartilaginous structure called the trachea, the main airway that connects the air passage opening of the back of the throat (called the glottis) and the tubes that split to aerate each lung (called bronchi).  This inflammation born of allergic stimulation creates an oft unbearable tickle when these poor little dogs breathe or get excited and set them off in spasmodic, hacking, sometimes gagging coughing spells.  In other cases, the dogs just cough and/or “reverse sneeze” regularly.

As opposed to lower airway inflammation conditions where narrowing of the airways plays a role in cough or labored breathing, bronchodilators, aka, medications that widen the diameter of the airway, are often of little benefit.  Therefore, treatment is aimed at reduction of inflammation within the upper airways.  In severe cases, I will sometimes start the patient with an injection of a short acting steroid, such as dexamethasone sodium phosphate, while concurrently starting the patient on a safe and effective antihistamine for long term maintenance management, such as Zyrtec.  In milder cases, I will often just start the patient on an antihistamine from the outset, boost with a short acting steroid only if results are lacking in within 1-2 weeks of therapy.

I strongly advise that any patient with inflammatory or allergic airway disease be maintained on veterinary grade omega-3-fatty acids for the anti-inflammatory action of this important supplement.  This will often decrease in varying degrees, dependence on anti-histamine, steroids, or other ancillary pharmaceuticals for breathing comfort.