Amish Are Among The Worst Puppy Mill Offenders 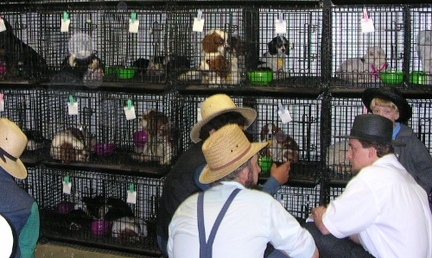 The Amish operate in a serious dichotomy of existence.  On one hand, they are pious, charitable to one another, and pacifists, rejecting all violence to the extent that they conscientiously abstain from military service.   On the other hand, as observed by many veterinary students that have traveled to Amish farms (me included) to treat their live stock during large animal ambulatory medicine rotations, their treatment of animals is often poor at best and all too commonly inhumane.  To many Amish, it is generally culturally accepted that animals are little more than extension of their farm equipment and deserve no further consideration than keeping them functioning and producing to support them.

As sad as that fact may be for Amish livestock, this mind set also commonly pervades their view of dogs as breeding vessels that can be exploited to crank out litter after litter of puppies to sell to either pet stores or direct to consumer.  While puppy mills are a problem throughout the country, there are areas of the country and certain communities where puppy mills are particularly prolific. Dog farming is a large part of the economy for many Amish communities. Lancaster, Pennsylvania, Holmes County, Ohio, and Shipshewana, Indiana are home to thousands of breeding dogs that will spend their entire lives in puppy mills.

Amish dog breeding/puppy mill operations may house anywhere from 10 to 1000 dogs.  Breeding dogs commonly spend their entire lives in cages, never even know the feel of grass under their feet or get any exercise.  Breeding dogs do not commonly receive any veterinary care and live with painful, debilitating conditions such as severe dentall disease, mastitis, ear infections, urinary tract infections, and more.  They are bred repeatedly without rest and are commonly shot once they are no longer useful as breeding animals.

I wrote this article to spread awareness about the Amish and their willful participation in puppy mills and general disregard for animal welfare beyond the animal’s use to their own sustenance.  I encourage all of my readers to spread awareness of this issue and the issue of puppy mills in general.  Only by educating the public and creating a wide ranging discourse about the puppy mill issue that plagues our society, can we make progress and enact legislation to ban puppy mills.

For more information on how you can help spread awareness and do your part to help combat the tragedy of puppy mills prevalent among the Amish and other rural centers in the United Stated, I recommend The Puppy Mill Project