Breeders Are Not Veterinarians! 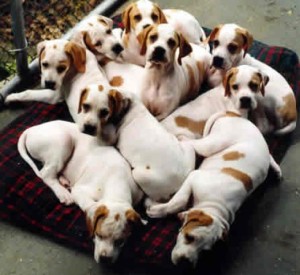 I saw a joke some time ago in a Facebook meme a veterinarian friend and colleague posted stating, “Taking pet health advice from a breeder is like going to a pimp for gynecology advice.”  While my vet friends and I all got a good laugh at this, the comparison was little more than a funny exaggeration we had some fun with.   Lately, however, I am beginning to think that there is more reality to this statement than just a funny little Facebook meme.

To be sure, I have seen an increasing number of breeders giving their customers health advice that they are not qualified to give.  Appallingly, they often even pre-emptively warn their customers that their vet will likely disagree because all of their opinions are based on stuff they were spoon fed in veterinary school and not based on “living in the real world.”  While most of the clients I have served for years or have recently come to my veterinary clinic from word of mouth referrals would never value a breeder’s advice over my recommendations, there are troubling number of pet owners that take breeder pet health advice as sound medical recommendations, often with deadly consequences.

How putting two dogs together to mate and have puppies makes anyone a pet health authority that “lives in the real world,” – as opposed to a veterinarian that has completed 4 years of undergraduate science, 4 years of rigorous study at a veterinary college than includes clinical rotations through a veterinary teaching hospital, passing national boards, passing state boards, then going on to practice medicine for a living while engaging in continuing education year in and year out – is a notion that I will never be able to understand how people can accept.

Two recent cases made me absolutely incensed that were the inspiration for this blog post.  The first was that of a Jack Russell Terrier that was diagnosed on pancreatitis that I had treated and recommended a prescription low residue diet to prevent recurrence.  I treated this dog on behalf of a pet rescue that was successfully able to adopt out the dog to a retired couple.  They were passionate about the breed and discussed their new dog with a friend who bred Jack Russell Terriers.

The breeder friend advised them to take the dog off the prescription low residue diet because it was loaded with grains.  According to the breeder, the feeding of grains is what caused the pancreatitis in the first placed and is a big cause for many of the diseases we see in dogs.  The dog’s new owners took their friends advice and put the dog on a grain free, high protein diet.

If this breeder had any real formal training or even had spent any time working in a veterinary hospital, she would know that pancreatitis is by in large genetic disease that is prevalent in small terriers and has nothing to do with grains.  It occurs when, in reaction to the ingestion of fats and proteins, the pancreas over secretes fat and protein emulsifying enzymes (amylase and lipase, respectively) and rather than activate in the gut where they are supposed to , they instead activate in the pancreas itself and begin to essentially digest the organ.  The result is severe pain, constant vomiting, and death if not treated expediently and aggressively.

After two weeks of feeding this diet, the dog came into my clinic seizing and in severe shock.  After medically stopping the seizure and stabilizing the shock, diagnostics revealed that the dog was in such a severe state of pancreatitis that the islet cells of the pancreas responsible forinsulin/ blood sugar metabolism were destroyed to the extent that the patient was now so severely diabetic, that he was in a crisis called diabetic ketoacidosis, as well as kidney failure.  Since pancreatitis, diabetic ketoacidosis, shock, and kidney failure each alone can lead to death even with aggressive treatment, I gave the dog a poor to grave prognosis.

Following 4 days of intensive care hospitalization and possibly some divine intervention, this dog miraculously recovered and went home, albeit needing insulin injections two times daily for the rest of his life.  His owners learned a very costly lesson in having taken their breeder’s advice over that of their dog’s veterinarian who had successfully treated and hitherto was successfully preventing the recurrence of the original bout of pancreatitis.  Had they just called me before making the dietary change their breeder friend had recommended,  I could have broken down for them from a physiological point of view, why that dietary change was a bad idea and avoided so much suffering and expense.

My next example of breeder misinformation that inspired this post is with vaccine recommendations, which I will highlight in my next post, Breeders Are Not a Credible Source for Vaccine Protocol Recommendations!

One thought on “Breeders Are Not Veterinarians!”