Cat Is Old, Not Eating, Losing Weight, And According To His Blood Work…Is Fine? 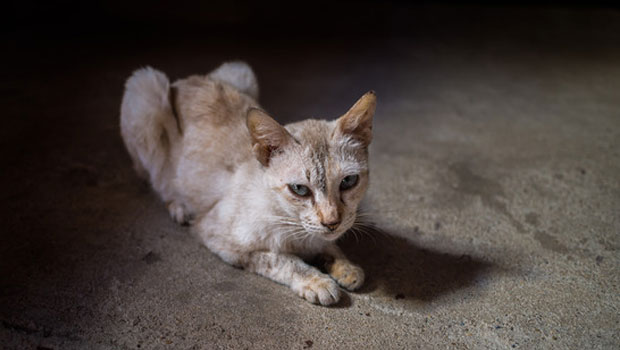 This is probably one of the most frustrating presentations in veterinary medicine.  A senior aged cat presents not eating, often for days, he/she is clearly dropping weight, but other than weight loss, a drop in body condition score, and dental disease, there is not much else to comment on following physical examination.  Never fear, for was can run blood work which will tell us exactly what is wrong with the kitty, right?  Wrong!

Just last week alone, I had 5 such a cases, all not eating felines over the age of 15.  While blood work often does offer us a confirmed diagnosis, blood work on all 3 out of 5 came back perfectly normal.  Thus, the only possible clinical scenario that I can present to the clients of the 3 based directly on the evidence at hand is that the patients may not be eating due to the dental disease.  However, the dental disease generally does not occur overnight, but instead was a slow and steady process.  Could the dental disease have finally reached a tipping point of pain that led to the feline patient to finally be unable to bear it and stop eating?  This is plausible, but with exception of outright tooth root abscesses, not likely.

Thus, the owner at this point has taken the initiative to bring his/her cat in, invest a few hundred dollars, yet is still left with a lot of questions as to what ails his/her cat.  As frustrating as this circumstance is for cat owners, I assure you, it is equally if not more frustrating for the attending veterinarian.  As naturally empathetic people, veterinarians abhor client financial and emotional investment without being able to reward that investment with answers.   So in these cases, what comes next?

Based on years of experience in dealing with this presentation, my tentative conclusion is generally that the cat has cancer that is just not affecting the organs and blood counts to the extent that they are visible in blood work.  The most common cancer in cats is lymphoma, which is most commonly found in the GI tract.  The most common forms of lymphoma are usually quite treatable with a generally well tolerated combination of a steroid and oral chemotherapeutic called chlorambucil administered once every 3 weeks after a 3-7 day loading phase of treatment.  This protocol is known to produce remission rates in upwards of 18-24 months, translating to 5-10 years in consideration of the life span of a cat.  This is great news, right?  Maybe.

In order to commit to a protocol such as this, it is first necessary to get a diagnosis.  This is where the challenge really lies, as diagnosis usually requires abdominal exploratory surgery with several biopsies takes of various segments of the GI tract, as well as sometimes additional biopsies of the pancreas, liver and spleen.  The biggest challenge is not the surgery itself, but convincing the owners of an elderly cat to not only make the financial commitment to the surgery, but also justifying this level of aggressive diagnostic work up in a cat of an advanced age.

I do not disparage an owner’s trepidation in pursuing such a course.  That is a personal choice they must make based on their financial ability to support such an investment, as well as their own ethical boundaries and personal philosophies in the care of animals; in this case to potentially buy 18-24 months of life and time with their family pet, which, by the way, is far from a guarantee.  I do not envy the decision they must make.

There is, however, a plan B.  While I cannot commit the patient to a course of chemotherapy without a confirmed diagnosis, I can start just the steroid aspect of it which would be prednisone alone.  This would be referred to as empirical treatment, where we are treating based more on hypothesis and educated guess based on limited diagnostic evidence.  If we are right in our suspicion, a lymphoma steroid protocol would provide a 2-4 month remission and provide quality of life during this period and in some cases longer.  This approach is a bit of a shot in the dark, but in consideration of the alternative and requiring little in financial investment (prednisone is cheap), there is little to lose.

Still, an owner is at best faced with a matter of a few months of remission trying the empirical approach versus possibly two years with exploratory surgery and biopsy.  These are not easy choices for most.

One thought on “Cat Is Old, Not Eating, Losing Weight, And According To His Blood Work…Is Fine?”