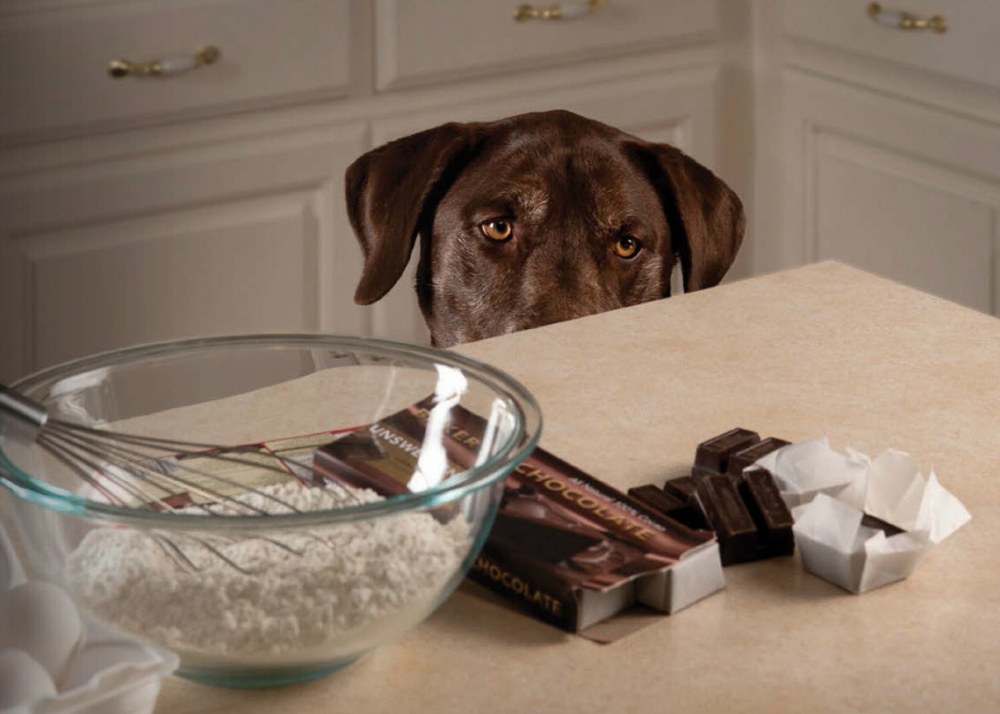 Chocolate toxicity in dogs is a real threat, especially during holidays like Halloween, Christmas, and Easter when a lot of chocolate is around and a lot of baking is being done.  Chocolate used in making cookies and cakes such as baking and semi-sweet chocolate are particularly toxic to dogs due to their high concentrations of theobromine in comparison to other types of chocolates.

Theobromine is a compound that is similar to caffeine with a stimulatory effect to the cardiovascular and nervous systems.  People eliminate theobromine fairly quickly, making toxicity a very rare event in people.  Dogs, on the other hand, eliminate chocolate very slowly and it can easily accumulate in the system to toxic levels quite rapidly when ingested in even moderate quantities.

Chocolate toxicity via theobromine leads to muscle tremors, accelerated heartbeat, seizures, abnormal rhythms of the heart, and cardiac arrest in dogs.  Any of these events can lead to acute death if not addressed quickly.

It is important to note, however, that different types of chocolate have different concentrations of theobromine, leading to varying degrees of potential toxicity, that is, the amount that would be necessary to cause theobromine toxicity in a dog that ingested chocolate.  For your convenience and for your own FYI in the event your dog unfortunately gets into chocolate, below is a table provided by the Veterinary Information Network that highlights the toxicity potential of the 3 most common chocolates ingested by dogs.

Treatment for chocolate toxicity if caught within the first 30-45 minutes of ingestion is to induce vomiting.  If that window has passed or despite vomiting the dog is showing any clinical signs of theobromine toxicity (agitation, tremors, seizures), then treatment is geared toward sponging up as much theobromine that remains in the gut with every 4 hour feeding of Activated Charcoal, as well as facilitating theobromine from the body with aggressive intravenous fluid therapy.  If necessary, medications that relax muscles and reduce seizure thresholds, such as diazepam, as well as medications the lower heart rate, such a beta blockers; can be administered as well.