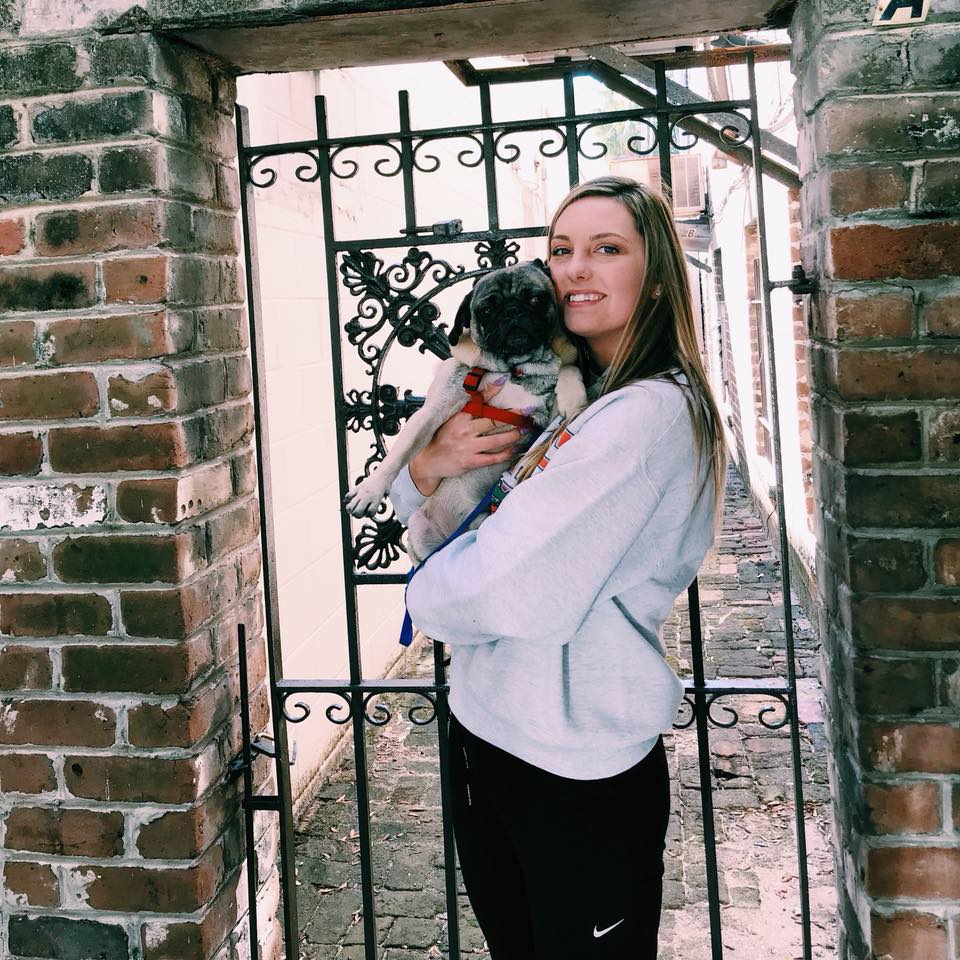 Bentley was a sweet, gentle little Pug that a young lady was gifted by her Mom so she had a friend to take with her to college.  Kiley’s Mom is a friend and she and her daughter chose me to be Bentley’s veterinarian.  Like most Pugs, Bentley was lively, full of personality, and had a gentle and friendly demeanor.

Last week, Kiley returned from home and realized that a gate had been left open by the lawn people and Bentley and her friend’s dog had both gotten loose.  The girls quickly began searching for the dogs, Kiley’s friend’s dog was promptly found, but they could not find Bentley.

They asked some Gainesville Regional Utilities (GRU) workers that were about if they had seen her little Pug.  The workers seemed flustered and pointed her toward the limp and lifeless form of a dog and told her they thought that was him.  It turned out to be Bentley and when she asked repeatedly what had happened to him, they implied that the dog could have been hit be a car but never really gave a straight answer.

2 days later, 2 GRU supervisors went to Kiley’s house to inform her that a GRU worker had struck Bentley with a meter stick in self defense.  It would later come out that the worker in fact had struck Bentley with a crow bar and fatally injured him.  Kiley and her Mom protested that Bentley was a gentle, friendly dog that weighed less than 25 pounds and no man could have possibly needed to go to those lengths to defend himself from a dog that probably barely reached his shins.

Both were informed that when feeling threatened by dogs, workers have the right to defend themselves and the matter was closed.  There would be no reprimand of the worker that killed the dog or any recourse whatsoever.

The notion that this dog could have been so threatening to a grown man that he felt the need to resort to beating him with a crow bar is both ridiculous and disturbing.  In the months that Bentley has been my patient, he has never shown a single tendency to be aggressive, quite to the contrary, Bentley was extremely friendly and gentle.  In a veterinary environment where we do things that some dogs perceive as threatening (trimming nails, administering injections, taking temperatures, etc.), Bentley was a model patient.

Let us say hypothetically that in the highly unlikely event that Bentley showed aggression to this worker, a dog this small cold easily been shewed away with a brush off with a foot.  I cannot see any circumstance where it would be necessary to beat this dog to death with a crow bar to back him off.

The man that did this to Bentley is simply a cruel sociopath that likely only needs an excuse to abuse and kill animals.  A person that has the ability to commit such a heinous act has no place in society and certainly no place working for GRU.  What’s more, if he is capable of doing that to a dog, he is also likely quite capable of physical violence toward people.  At the very LEAST, this man should be fired.

Instead, nothing is being done by the company, so I am helping this family not only to make Gainesville Regional Utilities famous, but also the supervisor that refuses to address this employee that brutally murdered a young lady’s beloved dog.

The supervisor’s name is:

He can be reached at:

Please help Bentley’s family and I make this post viral, as this kind of animal cruelty should never be tolerated!