Goodbye to a Beautiful Soul 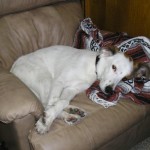 While most of my posts are about knowledge and experiences I intend my readers to learn from, this one is for me. On December 29, 2013, I had to say goodbye to a dear friend, one of the gentlest souls I have ever known. I write about her today, because it was too difficult to write about her until now.

Lulu first came into my life (at the time her name was not Lulu; she had no name), when I was a fourth year veterinary student on soft tissue surgery service at the University of Illinois, College of Veterinary Medicine Teaching Hospital. Along with four other students, I was paged to the junior surgery suit, as a truckload of county shelter dogs had been brought in to be spayed and neutered.

The University had an agreement with the shelter, where the fourth year surgical students would spay and neuter all of their shelter animals at no charge. It was a good symbiotic relationship, as it made the animals more adoptable and saved the shelter the cost of surgical sterilization, while giving the fourth year veterinary student hands on surgical experience.

My first spay was a shaggy white dog, with black and brown spots, one large brown one covering her right eye. I estimated that she was about 9 months old and my guess was that she was a border collie/setter mix, as gentle and sweet as she was hyper and awkward. Although she was rather quirky (she would do odd things like drop and splay out all four limbs whenever she was pet), there was a naïve innocence to her that endeared me to her.

I got through her spay routinely and without complication. Junior surgery was rather informal, and we often recovered our surgery dogs right on our laps. With my spay dog was still asleep on my lap, she suddenly awoke, picked her head up, and craned her head backward to hold eye contact with me.

There was something pleading her eyes that moved me, like she was asking me to give her a chance.  I pet her head, got her to relax again on my lap, as I raised my hand and asked my supervising surgeon if we were allowed to adopt these dogs. Already the owner of a yellow Labrador Retriever, being a fourth year veterinary student, and living in a studio apartment, the last thing I needed was another dog to take care of…and an unsocialized, un-potty-trained one at that. Nonetheless, there was no way I was letting this dog go back to the shelter. As it turned out, student adoptions were encouraged, so it was no problem signing the paperwork to bring her home was she was fully recovered.

My girlfriend at the time was a radiology technician that worked in the teaching hospital. Once the dog’s incision was healed, she helped me out by bathing her in horse shampoo to get the urine stains off of her and ready to go home. The day she was to come home, I called to her to follow me and uttered the name Lulu for no apparent reason…the name just came to me in a flash, and she was Lulu from then on.

That radiology technician is now my wife of 11 years, and mother of my two children. The first of our two children did not come along until 2008, so we always thought of Lulu as our first-born. Lulu’s odd little quirks and downright weirdness never really went away, but it was part of her unique charm, what we called Lulu-isms.  \She would run around the back yard for hours on end trying to herd squirrels, and when there were no squirrels to herd, she would simply run endless laps around the perimeter of the backyard.

When she was inside, she would stare at shadows on the wall cast by trees outside, not taking her eyes off them for a second as the shadows moved as the tree branches that cast them blew in the wind. When the sun went down, she would shift her acute attention to the flickering lights the television would splay on the walls. When we fed her, she inhaled her dinner so fast, barely chewing as if it were her first ever or last meal, she would burp loudly after eating, as her rapid intake of food caused her to swallow a lot of air.

But in the midst of all of Lulu’s quirks was a very affectionate dog, constantly resting her head on laps to be pet. Lulu adored my Mom, who adored Lulu right back, but she always joked that Lulu was like that obnoxious boyfriend who would not stop snogging on you.

Most endearingly, Lulu was gentle to her core, would not harm a single living creature. She especially loved children, and would roll onto her back whenever approached by one, always tolerant when a child may have accidentally been rough with her. When our children came along, she took that same Lulu posture with each one, and both of my children loved her back.

Last year, Lulu began to deteriorate, as she developed degenerative spinal disk disease in her thoracic spine. At 12 years of age, I could not justify putting her though spinal surgery, so I managed her disease with a combination of therapy laser, acupuncture, and nutritional support, which maintained her quality and slowed her decline.  However, this past holiday season, when alternative medicine and pain medications no longer kept her suffering at bay, we had to make the humane decision to peacefully say goodbye to our beloved Lulu.

No matter how humane the euthanasia process is, one never ceases to second-guess oneself when the time actually comes. This is true for all pet owners, veterinarians included. One cannot help but feel that perhaps tomorrow may be a better day. It makes it all the more difficult.

I held Lulu tight and told her I loved her as her sedative was administered, followed by the euthanasia solution. She was on my lap just as she had been when she awoke from her spay and we both decided to walk life’s journey together. May you rest in peace, my sweet girl. Thank you for your love, your loyalty, and your friendship.

2 thoughts on “Goodbye to a Beautiful Soul”