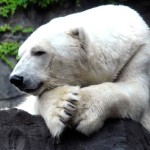 One of New York City’s renowned icons, Gus the Central Park Zoo polar bear, died this week at the age of 27.  Apparently, Gus was exhibiting odd feeding behavior having difficulty eating and swallowing his food.  Zoo veterinarians later discovered that Gus suffered from an inoperable thyroid tumor and made the decision to have him humanely euthanized.

According to Jim Breheny, executive vice president of the Wildlife Conservation Society, which operates the zoo, “Gus was an icon at the Central Park Zoo and a great source of joy for our visitors and staff.  He was an important ambassador for his species, bringing attention to the problems these bears face in the wild due to a changing environment.”

By in large, Gus had a very successful life having lived significantly beyond the life expectancy of the average polar bear in captivity (typically an average lifespan of 20.7 years).  Gus was born at the Toledo Zoo in 1985, then was transferred to the Big Apple three years later where he became an immediate sensation, a chief attraction at the Central Park Zoo.  He was most famous for his obsessive swim routine; delighting 20 million visitors in the course of his life time…including an 14 year old boy from Northeast New Jersey named Roger Welton.

I am sure I am not unique in my experience in seeing Gus as a child, being moved by the grace and beauty of the magnificent creature, as well as his child-like and innocent playfulness he displayed for all who came to see him.  For me, it was an impressionable moment in my childhood that built on other pivotal experiences that built my love and respect for animals, their importance in understanding the world we live in, ourselves, and one another.

Experiences like seeing an animal like Gus up close and personally also gave me a sense of responsibility to his and other species we share this world with, to conserve and protect our environment so that our actions do not lead to their demise.  While Gus may not have realized it, he served to showcase the beauty and majesty of his species on the world’s biggest stage.

May you rest in peace big boy.  The world was a better place for having had you in it.

Dr. Roger Welton is the President of Maybeck Animal Hospital and CEO/Chief Editor of the veterinary information and blog online community, Web-DVM.