Hip dysplasia – do OFA certified parents mean your puppy will have good hips? 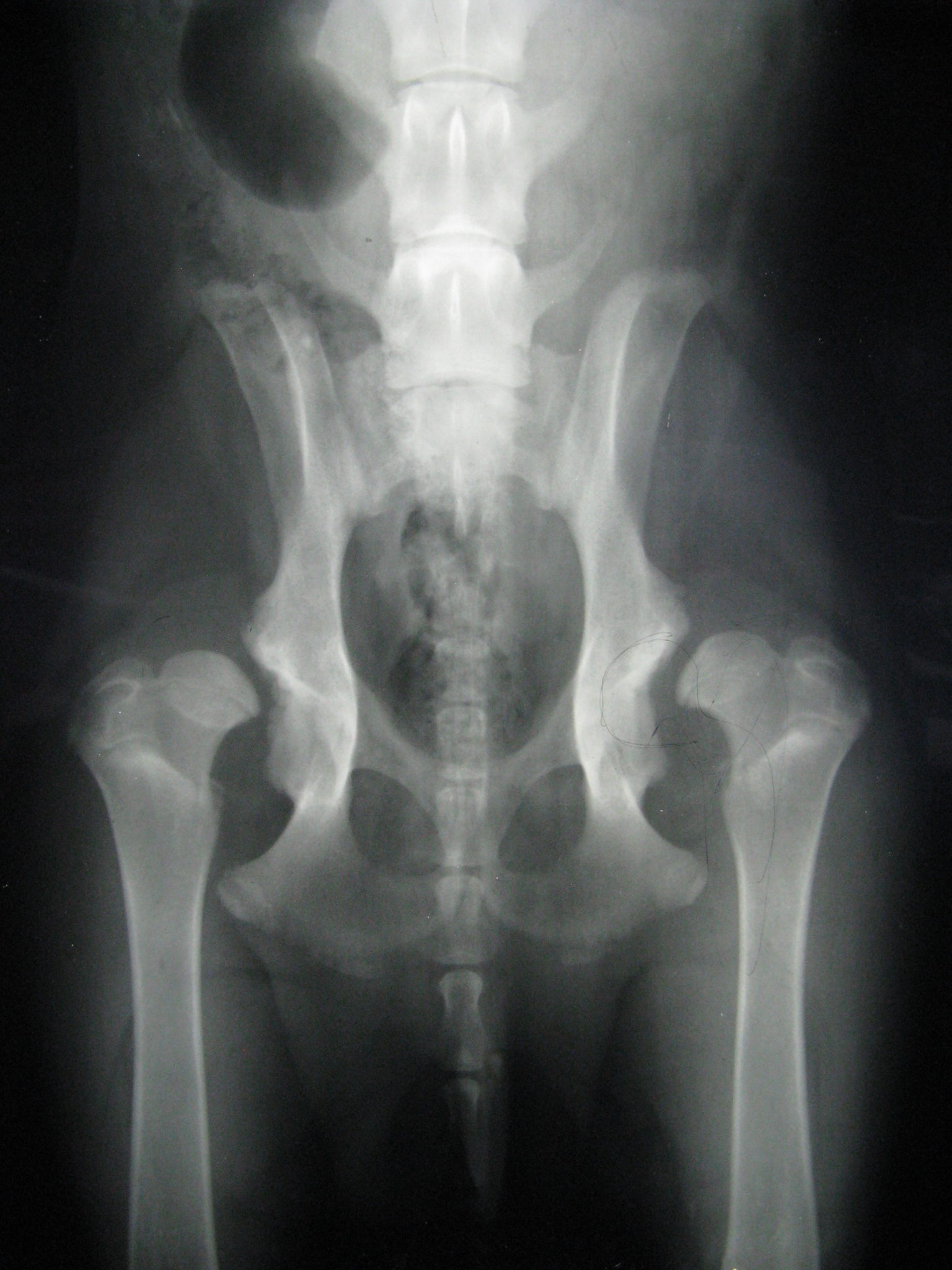 As you know, I am a huge proponent of adopting dogs from shelters and rescues. Until the shelters are empty, it makes no sense to buy a dog from someone producing puppies. That said, we do need a few people to breed, properly, in order to maintain the breeds we know and love. Further, some people want a specific niche breed that cannot be found (easily) in a rescue.  With so many crooked breeders out there (the majority, sadly), we veterinarians have told clients one thing to look for (particularly large breed dogs) is the breeder getting both parents OFA certified for good hips. (Many bad breeders do this too, nowadays, but it’s a start). If the parents have good hips and are OFA certified, then your puppy won’t have hip trouble later in life, right?

Hip dysplasia is a complicated, multifactorial disease. It’s defined as a looseness in the joint, causing the junction of the femur (thigh bone) and the pelvis to wobble and be unstable. It’s a ball-and-socket joint (think 8th grade biology) with the head of the femur as the ball, and the pelvis, or acetabulum, as the socket. The socket needs to be deep enough to cover the ball without it slipping around. If the socket is shallow, we have looseness, or instability. This instability leads to bone-on-bone rubbing, and that is where the pain comes in. This friction erodes the cartilage that normally stays between the two bones to provide cushioning. Damaged cartilage means more friction, and major pain! The destruction of the cartilage leads to arthritis – inflammation of the joint.

One study showed that if two parents have good hips by OFA standards, 1 in 4 of the puppies may still develop hip dysplasia. Pretty sucky odds. Turns out this disease involves many many factors. Genetics certainly plays a big role, but nutrition, body weight, environment, muscle mass, and even hormones all may play a role as well.

OFA stands for Orthopedic Foundation for Animals. To get the certification, a dog must be at least 2 years of age, and have x-rays performed under sedation or, ideally, general anesthesia. These x-rays are submitted to the OFA, where three veterinarians who are specialists in radiology read the x-rays independently. Normal hips are rated Fair, Good, or Excellent. Hips with signs of dysplasia are rates Mild, Moderate, or Severe. Here’s their website on how they average the 3 opinions. Evaluating the hip joint is rather subjective, and often the three specialists may not agree.

OK, so if your dog has good hips, what’s the problem? A study was published in the Journal of the American Veterinary Medical Association that shows the widely accepted OFA ratings may not be as accurate as we’d like. One thing – the positioning of the x-rays may not be ideal for detecting laxity, or early dysplasia, in the hips. Having a dog lie on his back and pulling the hips straight out and down mimics how a human stands, but it is obviously not a natural position for the dog. Pulling the legs this way might actually push the femur (thigh bone) into the hip socket, masking any dysplasia!

There is another means of assessing dogs’ hips, called Penn-HIP. The x-rays are taken in a more natural position, and instead of human opinion, which can vary widely and be subjective, Penn-HIP offers a mathematical way to measure any looseness in the join. This looseness is assigned a number, known as the distraction index. Here’s their explanation with pictures. Perfect hips have an index of 0, meaning no deviation from ideal. Any hip with a distraction index of 0.3 or greater indicates instability in the joint. These hips are statistically likely to develop arthritis (the pain from hip dysplasia) later in life. Penn-HIP do not offer certifications like OFA, just an evaluation.

The paper in JAVMA compared OFA and Penn-HIP, and found that many hips that were passed by OFA actually had laxity, indicated by a high distraction index, determined by Penn-HIP! Of the hips that the OFA found dysplasia or laxity on, Penn-HIP gave all of them >0.3 index. So if the dog has hip dysplasia found by OFA, Penn-HIP agreed 100%.

However, half of the dogs that earned an OFA score of Excellent had a distraction index >0.3 on Penn-HIP! Over 80% of the Good, and over 90% of the Fair hips on OFA had a distraction index >0.3 on Penn-HIP, meaning hip dysplasia! This tells us that some of the subtle dysplasia or laxity that a human can’t see in one position can be detected in the other.

Is OFA bad? Not at all! They offer certifications, and Penn-HIP does not, so it is something. Also, any veterinarian can take OFA quality films on a dog. To take films for Penn-HIP, veterinarians must take a class from the company and be certified, so that is certainly a limiting factor. Not every vet can use the Penn-HIP system for that reason. OFA can give us a general idea about the parents’ hips (remember, it picked out the really bad ones easily!), but don’t put a ton of weight in it if they say they are great.

So, given all the factors in addition to genetics that play a role in the development of hip dysplasia, and the low sensitivity of OFA films, how sure are you that a puppy from OFA certified parents will have good hips? We can do our best, but there are still many things beyond our control. Your best bet – keep your dog at an ideal weight, using portion control and moderate exercise, and feed a large breed puppy food to your large breed puppy.