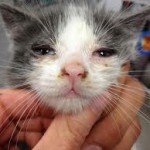 90% of upper respiratory infections in cats are the result of either feline herpesvirus or calicivirus (calicivirus will be covered in the next preventative health care series).  More than 80% of cats have had exposure to herpesvirus, making it one of the most common disease complexes in cats.  The good news is that most cases of herpesvirus are self-limiting, with only a minority of cases taking on a more severe and/or long term chronic form.

On the other hand, one of the more frustrating aspects of herpesvirus in cats is that, while the immune system in most cases suppresses future outbreaks in the healthy, adult cat, periods of stress or other circumstances that may lead to immune suppression (old age, other concurrent disease, immune suppressive therapy, etc.) may lead to future potential outbreaks.  This is because the virus, similarly to the various herpesviruses in people, never truly is cleared from the system, remaining latent in the host’s DNA.  Thus, just as a person who experienced chicken pox, a herpesvirus, may develop shingles later as a senior or geriatric aged and/or immune suppressed form, cats may also develop future outbreaks of herpesvirus.   As such, even though the likelihood is high that a given cat may have been exposed to herpesvirus, an AAHA based immunization protocol (outlined below) is still a good idea to boost the immune system against future outbreaks.

Herpesvirus may take on two forms in cats, the most common form of which is upper respiratory infection.  Signs include sneezing, coughing, nasal discharge, hoarse voice, and fever.  It is not uncommon to see a very high fever.  In some cases, opportunistic secondary bacterial infection may lead to lower respiratory infection, leading to bronchitis or pneumonia.  These complicated cases are seen most commonly in very young or very old cats, some of which require hospitalization and intravenous fluid therapy and antibiotics to resolve.   The more common, self-limiting cases are treated with an outpatient course of antibiotics to manage opportunistic secondary bacterial infection while the feline patient clears the virus, a process that typically leads to resolution in 7-21 days.

Another form of herpesvirus leads to conjunctivitis, which is infection of the inner membranes of the eyelids, the third eyelid, and cornea of one or both eyes.  Swelling, excessive discharge, and excessive tearing are common.  In some cases, the cornea can form a focal region of eroded tissue called a corneal ulcer.  Cases of herpesvirus conjunctivitis in cats are typically treated with a combination of systemic and topical antibiotic drops.  In cases where there is a corneal ulcer, a corneal lubricant/protectant topical drop called Genteal is commonly concurrently used.

Both the respiratory and ocular forms can reach chronic states, where the feline patient suffers from ongoing or chronic recurring infections.  For either form, it is often helpful to supplement the affected cat’s diet with the amino acid, L-lysine.  L-lysine safely modulates the immune system to optimally suppress herpesvirus.  For the ocular for, it is often helpful to maintain the patient on a topical antiviral drop called idoxuridine.

As previously mentioned, herpesvirus outbreaks and/or novel infections are effectively prevented with an effective and safe vaccine.  Represented as the “R” (R stands for the clinical syndrome herpesvirus causes called rhinotracheitits) in the combination core feline vaccine, FVRCP, the vaccine is given at 6, 9, and 12 weeks of age, boostered at one year, then administered once every 3 years thereafter.