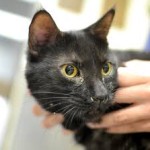 Today’s Preventative Pet Health Care Series continues with feline respiratory disease complex with calicivirus. As previously stated, in my herpesvirus post, 90% of all feline upper respiratory infections stem from herpesvirus or calicivirus. Unlike herpesvirus, calicivirus is fairly stable in the environment, not uncommonly persisting for as long as 10 days. This makes it an extremely contagious disease known to rapidly spread and persist in multiple cat environments, such as shelters, catteries, and homes with large numbers of cats. To add another layer of frustration and also differentiating the disease from herpesvirus in cats, calicivirus patients commonly remain contagious for several months beyond recovery.

Signs of calicivirus are similar to herpesvirus in cats: fever, lethargy, sneezing, coughing, inappetence, and listlessness/labored breathing in severe cases. Calicivirus like herpesvirus commonly is complicated by opportunistic bacterial infection, typically Chlamydia, which readily proliferates in conjunctival (eye membrane) and respiratory tissues. Thus antibiotics are often beneficial in aiding in a feline’s recovery from calicivirus infection.

In some rare cases, calicivirus can reach a chronic form in the gums, leading to gingivitis and dental disease. Some of these cases can become quite serious and debilitating with ulceration of the gums and the development of painful lesions of the teeth known as feline odontoclastic resorbtive lesions (FORL). Dental cleaning and extraction of diseased teeth will often be helpful in controlling this form of calicivirus.

Calicivirus is quite preventable, present as a safe and effective component of the combination FVRCP core vaccine. This vaccine is given as part of the kitten series at 6, 9, and 12 weeks of age, boostered at one year, then administered once every three years thereafter.