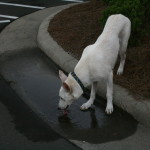 Leptospirosis is a bacterial disease that attacks the canine liver and kidneys.  While it has an affinity for canines that are considered among the highest risk with regard to both morbidity and mortality in companion animal species, it is a zoonotic disease; that is, it has the ability to infect any mammalian species, including people.  Leptospirosis is unique in that it is primarily transmitted via the urine of infected squirrels (which are the primary reservoir for disease), and, it has the ability to survive for extended periods of time in fresh, standing water (lakes, ponds, puddles).  Thus, anywhere there is a local squirrel population and a dog may have access to contact with fresh, standing water; that dog is at risk for leptospirosis.

Clinically, leptospirosis invades the liver and kidneys of infected dogs and leads to liver and kidney failure.  Even with aggressive hospitalization that includes treatment with intravenous fluids, antibiotics, anti-nausea medication and GI protectants, and fresh, frozen plasma, leptospirosis carries very high mortality rates approaching 50%.  Given its potential to infect other animals and people, leptospirosis is especially concerning.

Leptospirosis is still considered a non-core vaccine, but realistically, there are few places in the US that are devoid of squirrels and/or fresh, standing water.  Even in arid climates, puddles created by a sprinkler system, garden hose, or washing a car, etc., still constitute fresh, standing water.  Few areas have zero wild squirrel populations.

Leptospirosis has an effective vaccine commercially available.  The vaccine still carries some negative press in certain canine enthusiast circles lingering from a leptospirosis vaccine put out by Fort Dodge Animal Health in the early 2000’s that carried a higher rate of adverse reaction in comparison to other canine immunizations.   Since then, the vaccine has been perfected and made quite safe by several animal pharmaceuticals for over a decade, and Fort Dodge Animal Health no longer exists.  Still, some pet owners are gun shy about the vaccine, and for some, no amount of convincing that the risk of disease far outweighs the risk of immunization against it will change their minds.

For the majority of dog owners that comply with leptospirosis immunization when there is a clear and present risk of disease based on geography/landscape, the vaccine is administered at 9 weeks, boostered at 12 weeks; then administered once yearly thereafter.