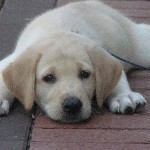 Just about every mammalian species has its own unique parvovirus’s. Luckily, parvovirus’s are species specific and do not cross infect other species. In the case of canine parvovirus, the virus has an affinity for regions of the body where rapid cellular replication occurs. Thus the gastrointestinal tract, the lymphatic system, and the bone marrow are primary targets of the virus.

Canine parvovirus is transmitted by the fecal oral route, meaning that it is either ingested or inhaled when a dog comes in contact with the secretions stool or urine of infected dog. Parvo is a highly contagious disease in dogs and has a incubation period of 3-7 days.

Once infected, the most common clinical sign initially his diarrhea. The diarrhea is typically especially malodorous and within 1-2 days commonly becomes laden with blood and mucus as well. Because the virus attacks the bone marrow, the soft inner portion of long bones responsible for the production of red blood cells and white blood cells, the gums are commonly pale or white instead of their normal pink color. This is because of anemia (low red blood cell count). The white blood cells since they are also synthesized in the bone marrow are often very low, making it very difficult for the patient to mount an immune response. Thus, secondary infections are very common.

Hospitalization for parvovirus can be very expensive because it requires an isolation ward due to its high risk of contagion. Blood transfusions are also commonly necessary because of blood loss in the stool and the inability of the bone marrow to effectively synthesize new red blood cells to replace the blood loss. Treatment is generally supportive, with aggressive intravenous fluids, antibiotics, and anti-nausea and antidiarrheal agents; it is not uncommon for infected dogs to have to be hospitalized for 5-7 days.

Thankfully, a very effective vaccine is available to protect dogs against this very common and deadly virus that carries a mortality rate of 50% even with aggressive treatment. Parvovaccine is represented in one of the P’s in the core DHPP canine vaccine. This vaccine is administered at 6, 9, and 12 weeks of age, then boosted one year later. Following the one-year booster, the D HPP vaccine can then be administered effectively once every 3 years.