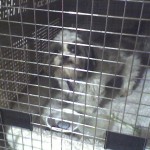 A very kind retirement age client of my veterinary clinic of many years brought her new puppy in to see me a few months ago.  She was beaming with pride with her new little Shih Tzu, as he was the cutest little fur ball and had the personality to match.  When I asked where she obtained the puppy, she replied with a bit of awkwardness that she had purchased the puppy from the pet store in the mall just down the road, a notorious puppy mill client, and peddler of expensive, sick dogs.

She could not help herself, she told me, as she had seen the puppy in a cage as she looked in while walking past the pet store, while at the mall shopping for things other than a new family pet.  The little puppy reminded her of a past beloved dog who had long since passed.  She knew the source of these dogs and the reputation of the store, but proceeded to pay an inordinate sum for the puppy nonetheless.   From her point of view, she was rescuing the puppy from its caged existence or from possibly being bought impulsively by people who may lose interest and neglect or give up the dog at a later time.

I could certainly understand this lady’s perspective, as I am heartbroken when I see puppies segregated in cages, creatures that crave and long for their mother and litter mates, who by their nature are social animals needing social interaction for their mental health and development.  They have been taken from their mother and litter, shipped, and put in cages until such a time that a person may choose to buy them.  One would have to be cold hearted to not be affected by that.  That is why I do not even look when I pass pet stores that sell puppies and kittens.

Knowing what a good person my client was, I did not want to make her feel horrible in the midst of her joy with her new friend, but I did have to let her know that the purchase of these puppies keeps pet stores and the puppy mills that supply them in business.  As long as they are in demand, the cycle will never end.  And while the puppy may have gotten a great home, its little mates may not have, and the mother is left to continue churning out litter after litter with no regard or compassion for her; rotting in a cage likely in filth and in abysmal conditions until the day comes that she no longer is able to bear puppies.

I also reminded her of the poorly ethical breeding practices of puppy mills, commonly leading to congenital defects and predisposition to any number of chronic congenital diseases.  I told her that I would not lay on any more guilt, let her enjoy her puppy from here on out, and cross fingers that he would turn out to be healthy.

Right out of the gate, I found an umbilical hernia on the puppy and also found that he was infected with two worm parasites and two protozoal parasites.  We successfully treated the puppy for the parasites, but by puppy visit number 2, I discovered a grade 2 out of 6 heart murmur (heart murmurs are graded on a scale of 1-6 with 1 being the least intense, 6 being the most…intensity of murmur often correlates with the degree of heart defect).  By the fourth and final visit, the murmur had progressed to grade 4.  The rapid progression concerned me, as did the owner’s observation that the puppy was getting fatigued by what was before, a very tolerable level of exercise.

Given this, as well as the fact that we needed to repair his hernia as well as neuter him if he remained stable enough under anesthesia, we performed a cardiac work-up on him (chest  x-rays, cardiac ultrasound, and EKG) and discovered that he actually had two congenital heart defects: pulmonic valve stenosis and aortic valve stenosis.  These defects would most certainly shorten his life, and necessitated that he begin cardiac medication at only 6 months of age.

Luckily, able to take necessary precautions knowing the exact condition of the heart, the hernia repair and neuter proceeded without incident.  My client still does not regret her decision; however, she better understands the nature of pet stores, puppy mills, and the industry she supported, as her experience really hit home.  She feels that she was meant to adopt this puppy, as many an impulse buyer may not have had the puppy worked up properly, nor have been willing to commit to what will be lifelong medical care for his heart disease.  Many an impulse buyer may have even returned the puppy under the Florida puppy lemon law, after which the pet store most assuredly would have had the puppy destroyed.

She also plans to share her story with anyone who will listen, to shout from the roof tops and spread the word about pet stores that sell puppies, and what results when people choose to purchase from them.  Who knows, perhaps in the grand scheme of the things, my client was meant to have this puppy.

At any rate I shared her and her puppy’s story so that I can make clear that puppy mills and the societal ills and cruelty they peddle, exist because there is clearly a market that supports them.  Until that market diminishes, they will continue to exist.  We can complain, feel sadness, express outrage all we want; but when it comes to puppy mills and pet stores that sell puppies, the blame for their persistence is all ours.