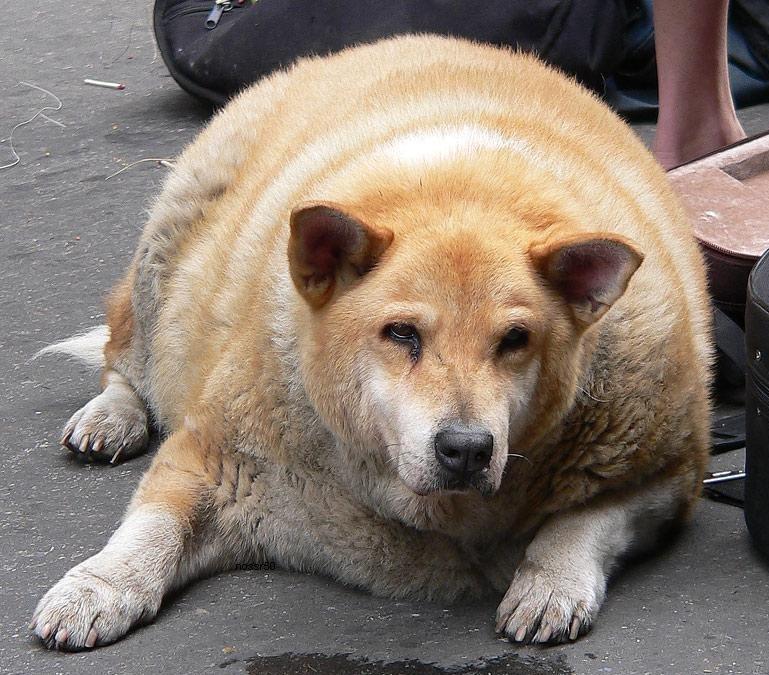 You might feed organic, grain free food. Fluffy might be sleeping on a bed of dye-free organic cotton. You might cook free-range meat with whole grain meals every day for your pet. She drinks filtered water. Her air purifier hums consistently.

Hopefully you keep your pet on a routine heartworm preventative. You follow your vet’s advice on dental care, flea control, preventative health (all very key to your pet staying healthy!).

Yet, there is one thing that will have the biggest overall impact on your pet’s quality (and quantity) of life.

And it doesn’t cost any extra!

What is this one magical thing? Maintaining your pet at an ideal weight!

It sounds so simple, and it should be! Our dog can’t exactly drive himself to Taco Bell when he feels the urge. We can control this, yet so many of us suck at it.

Sure, there are medical conditions that can make a pet more prone to obesity. But these can often be addressed – and managed – by your veterinarian. I’m talking about the vast majority of dogs and cats in this country that are simply overfed. What’s the big deal?

Most everyone knows the drill. Obesity makes arthritis worse. Obesity increases the risk of diabetes. Obesity makes cats prone to fatty liver disease. People say they know, but it isn’t hitting home, obviously, because vets across the country are seeing more and more obese patients. If a pet is obese, it is suffering for it. He or she will not live as long because of it, plain and simple.

Honestly, I think morbid obesity is more cruel than starvation! I have seen both. The obese dogs are unable to move. The owners think they are happy, but lying in urine all day is not fun. Having to struggle to breathe is misery. The food doesn’t make it any better or ease the pain. Meanwhile, the dogs I’ve been involved with in rescue that are emaciated are happy! Feed them, and they are running around, wagging their butts, as happy as can be. Being skinny isn’t painful – being hungry is what hurts. That’s an easy fix.

I’ve seen many obese animals over the years whose owners killed them (indirectly) by overfeeding them. Instead of just bland medical facts, here’s some true stories. Learn from them. I’ve told people facts about the problems obesity can cause for years, and many still aren’t getting it.

I hope this will be a wake-up call. These stories might be hard to read – just know that I want to help you and your pet! 🙂

Trudy died at 3 years old from her obesity. She was a husky mix. A healthy, maybe even chubby, weight for her would have been about 70 lbs. I don’t know exactly how much she weighed, because the scale at the time went up to 200 lbs, and she was over that. Yes, she weighed THREE TIMES what she should have weighed. When I first met her I wanted to cry. Her head was a normal size, then it was attached to this balloon-like body. She could barely walk. Watching her struggle to stand was awful. Her skin was taught on her body. She panted all the time, partly from being hot, and partly because breathing was a battle. Her owners knew she was overweight, but did not have a grasp of the severity of the situation, despite the pleading of several veterinarians. She developed an auto-immune disease that we don’t typically see in her breed, and she died in the emergency clinic despite treatment. In cases of extreme obesity, fat can act like an endocrine organ. It can secrete hormones that alter the body’s every day functions. We suspect that is what killed Trudy.

Kira was a lab who lived to be 10 years old. Not bad for a lab, but she should have lived longer. She had arthritis in her hips and knees, possibly even lower back. That is common in older, large breed dogs. If the dog is an appropriate weight, pain meds can do wonders for these dogs!  Kira weighed 140 lbs and should have weighed about 90. Her obesity was not as extreme as Trudy’s, but in the case of arthritis, it does not need to be extreme for the dog to suffer. Despite being on a variety of pain medications, her limbs were simply too weak to hold her up. Her owner was not able to lift her. She wanted to put Kira on a diet, but obviously, weight loss isn’t going to happen overnight. We had a dog who was unable to move, completely miserable, barely able to scoot away from her poop. Had she not been overweight, she would have lived much longer. Her blood tests were perfect, and the rest of the body was still functioning perfectly. We ended up putting Kira to sleep because she was too obese to move and no one in the house could move her either.

Joey was a pit bull mix who loved to eat. Most pitties are very well muscled, but we never saw any of Joey’s muscles. He should have weighed about 70 lbs, and he weighed 145. He died at only 5 years of age. He developed fatty liver disease, because there was so much fat in his body, it basically had nowhere else to go. It built up in his liver and caused organ failure. He also developed diabetes. His body did not respond to treatment in the hospital, where he died. Dogs that are not obese do not develop fatty liver disease, and rarely develop diabetes. His obesity killed him.

Aurora died at 7 years old, which for a cat, is barely middle age! She had an average build in terms of bone structure, but weighed 22 lbs. Aurora’s passing was sad, because her owners really wanted to save her. She had become diabetic from her obesity, and her body developed a secondary disease called ketoacidosis. She was in a hospital being treated, responded beautifully to treatment of the diabetes, then stopped eating. She developed fatty liver disease from not eating (In cats this happens when obese cats stop eating- here’s how). She was put to sleep in the hospital because her owners simply could not afford to continue the aggressive treatment needed – they had already tried very hard!

So no, being overweight is not cute. It’s deadly. These are only a handful of stories. About once a week I see an elderly large breed dog who is overweight and can barely walk, and the owners want me to fix it. By that time it is too late! The owners always want a quick fix, and there isn’t one. They want me to go back in time and prevent the dog from becoming obese. Pain meds don’t help when the pet’s legs are too weak to support ALL that weight! And weight loss does not happen overnight.

If your veterinarian tells you your pet is overweight, listen! Intervene now! Everyone waits until they have a diabetic cat, or a dog who can’t walk, and then wants to go back in time and fix it. Please, I implore you. Your pet will thank you! No, they don’t have to have a bikini body, just be able to function. I have an article here on body condition scoring, and determining how overweight your pet is on a 1-9 scale. For the record, the pets in my examples were initially off the charts. (They would be 11 or 12 out of 9!)

Not every pet can be ideal, but if they can at least be close, they will live longer and feel better. If your pet is extremely obese, have a talk with your veterinarian about ruling out other diseases first. Then go on a medically supervised diet. If your pet’s weight is creeping up, stop now and change something! Your vet can give you an idea how much your pet should weigh, and give you a goal. Most vet clinics will let you bring your pet in for free to check a weight on their scales, and I encourage that so we can make sure progress is being made.

Bottom line – dogs and cats that are obese are suffering in silence. And in the case of older, arthritic dogs, even 5 extra pounds can be the difference between being able to walk or not! If your pet had anything else wrong, you’d want to help them and fix it, right? Body weight should be no different!