The Troubling Aftermath Of Veterinary Misinformation – This Time Convenia 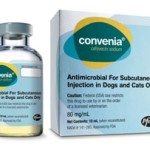 The latest veterinary/big pharma conspiracy tale has hit the internet and gained unsubstantiated credibility: the long acting injectable antibiotic Convenia is deadly to dogs and cats.  Convenia was launched by Pfizer Animal Health (now Zoetis) in 2008 as the only antibiotic of its kind: a one-time injection that exerts its antibacterial effects for up to 14 days, effectively eliminating the need for owners to have to orally medicate cats and dogs sick with infections.  In a class of antibiotics called third generation cephalosporins, effective against bacteria that commonly cause skin infections, upper respiratory infections, and urinary bladder infections, Convenia also had impressive FDA safety data.

For more on Convenia, its use and safety, and where the rumor of its danger likely emanated from, please see my previous article on this topic below:

About a month ago, a client came in with a cat she had adopted from a shelter, which was sick with an upper respiratory infection, but still eating and drinking.  I advised we treat the cat with a Convenia injection which she declined believing the internet rhetoric about the extreme dangers of Convenia over my overwhelmingly positive experience with the product in the 7 years I have been using it.  Since she insisted, I instead prescribed Clavamox, an older generation antibiotic that is generally safe, but can occasionally cause GI upset in certain feline patients.

By day 3 of treatment, this kitty began vomiting  likely from the Clavamox, at which time, I advised the owner stop the Clavamox, bring him in for supportive care, and consider changing to Convenia…which she continued to decline.  Thus, I then switched the cat to another oral antibiotic called Orbax.  While he did not vomit up the Orbax, he still would not eat or drink, which prompted the owner to bring the cat back in.

At this point, I noted that the cat was now jaundiced, a yellow pallor noted on the skin and whites of the eyes commonly seen in cases of liver disease.  A few diagnostics later, I diagnosed fatty liver syndrome, a common consequence in cats that stop eating for prolonged periods of time…cats are not well adapted to rapidly mobilizing body fat to meet their energy needs.  The treatment for fatty liver is to feed the cat enough calories to overcome the negative energy balance…but with an anorexic cat, the only way to accomplish this is to surgically place a feeding tube to administer the feedings.  Following feeding tube placement, two weeks of feedings, and several medications, the cat eventually did recover, but at considerable expense to the owner, and a great deal of stress to him…likely stemming from this owner’s refusal to allow me to administer Convenia because of her fear of the drug born of misinformation and sensationalism.

Just last week, I administered Convenia to a little dog with a skin infection over his knee.  The dog had had Convenia in the past and the owner was unconcerned about it…in fact, she was thrilled with the opportunity to utilize the product, as her little dog is notoriously difficult to orally medicate.  Within a few days of the injection, the owner had gone into a natural pet food and medicinal store in my area, where she was shopping for natural food.  The clerk noticed her dog had a wound on his knee and asked what it was.  She noted that it was an infection, but it was getting better every day, since her veterinarian has given him a Convenia injection.  The clerk proceeded to tell my client that she should have never let me do that, as Convenia has a high chance of killing her dog.  He mentioned liver failure specifically, despite the fact that Convenia is not metabolized at all by the liver and is eliminated from the body unchanged via the urine.

Past business hours and unable to speak with me, my client spent the rest of that evening in tears, not only in fear of what the Convenia would do to her dog, but also wondering why the veterinarian she trusted with the care of her dogs, would treat her dog with such a deadly drug.  Once we spoke in the morning, I alleviated her fears by letting her know that not only is the FDA safety data on Convenia very good, but I have only had one minor side effect of a few days of lethargy in a cat questionably attributable to Convenia in 7 years of use, after thousands of injections.

I fear these cases are just the tip of the iceberg, as these things tend to gain traction very fast through social media and the non-medical pet industry cirlces (groomers, breeders, natural pet stores, etc.).  If this misinformation reaches your neck of the woods, rest assured, Convenia is not the devil…it is an effective antibiotic that enables veterinarians to treat many manners of infection with just one injection and guarantees 100% treatment compliance.