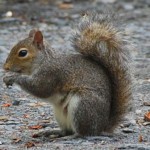 I started my veterinary career in a very densely populated suburb on the North Shore of Long Island, NY, called Huntington.  In that environment, the hospital I worked in saw several canine cases of a bacterial disease called Leptospirosis, which is transmitted primarily via the urine of its most common carrier, the squirrel.  The bacteria are excreted through the urine of infected squirrels, and then have a knack for persisting in the environment in fresh, standing water (lakes, ponds, puddles, etc.).  Thus at the practice I worked at in Huntington, we administered the Leptospirosis immunization to dogs with few exceptions, as a core immunization.

As I was preparing to move to Florida in 2004, a state known for its fresh water marshy landscape and prevalence of large puddles, drainage ditches and retention ponds, I thought that I was going to be seeing a much greater number of Leptospirosis cases.  As I took over the practice I purchased, to my virtual disbelief, I learned that my predecessor was not regularly immunizing for Leptospirosis.  She informed me that she never saw any cases of it.

This made no sense to me, as the environment here in Florida would seem much more conducive to persistence of Leptospirosis bacteria in the environment than it would in Long Island where I saw cases all the time.  However, as I engaged in the local veterinary community, I learned that many other veterinarians had not observed Leptospirosis with any significance either.  Thus, for many years, I did not administer Leptospirosis regularly to dogs as a core vaccine.

Around 2011, my area started seeing a spike in Leptospirosis cases in dogs.  This is a particularly troubling development given its high mortality rate in dogs, as well as its potential to infect people.  That trend has continued with the disease remaining steadily on the rise as evidenced by the fact that I have personally seen 2 cases just in the past month.  Thus, most area veterinarians, me included, are now recommending Leptospirosis as a core immunization, now recognized as a disease significantly endemic to this region.

So what changed?  Why the sudden rise of disease?  Consider this: during the same time period that I have observed more cases of Leptospirosis in dogs, I have also observed a sharp increase in cases of intestinal parasites diagnosed on routine stool analysis.  It is a simple deduction to reflect on what parasites and Leptospirosis have in common: wild animal reservoirs.

There has been a construction boom in the Florida Space Coast where I live and practice, that started in late 1990s, slowed down temporarily by the Great Recession in 2008, and then resumed full steam around 2011.  As the urban sprawl continues to encroach into former conversation areas, marshlands, and cattle ranch lands that were home to countless wildlife species; the wild animals are transitioning into a suburban existence.  Just yesterday evening, I saw a Bobcat on the edge of the school field where my son had just finished up lacrosse practice.

Bobcats and other wildlife carry diseases and parasites that our pets can catch, making preventative pet health care increasingly important for the safety of not only family pets, but the human family members that can catch disease like Leptospirosis from household pets.

While urban sprawl and its aftermath happened in Long Island a long time ago, it is happening here and in many other areas of the country.  With wildlife increasingly living among us, preventative well care for household pets has never been more essential.