What Has Happened To The German Shepherd Dog Breed? 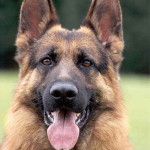 To be sure, occasional examples of what German Shepherds once were are still among us, coming from exceptionally ethical breeders that breed as much for temperament as they do optimal health and lack of congenital disease.  More commonly, however, what I typically encounter in practice are very fearful, skittish, unhealthy German Shepherds, riddled with genetic disease and prone to bite.  More than half of the German Shepherd dogs that come in my exam room have to be muzzled because of fear aggression.  Even with the German Shepherds whose fear does not lead them to bite, the office visit is often unpleasant and difficult for the dog owner, veterinarian, and veterinary staff alike; challenged to give a comprehensive physical examination, with the dog in utter terror from simple nail trims or ear cleanings.  From a health perspective, German Shepherds are commonly afflicted with severe skin allergies, inflammatory bowel disease, hip dysplasia (inherited deformity of the hip joints), congenital heart disease, degenerative myelopathy (a degenerative spinal cord disorder that leads to paralysis and eventually death), and are prone to cancer.

Like many other breeds that become popular, German Shepherds became the victim of irresponsible, unethical breeding, born of greed, ignorance, and combinations of both.  In-breeding was and remains rampant, leading to inherited recessive genetic disease and neurotic temperament, unhealthy or ill-tempered dogs not removed from the gene pool.  Puppy mills are the guiltiest party with regard to these issues, but backyard breeders and ill-informed people looking to make a quick buck by breeding their dogs are just as guilty of ruining what was once a near perfect breed of dog.

For those of you who are German Shepherd dog breed enthusiasts, please do not take offense to this post.  The reason I took the time to write this blog post was to create awareness of the plight of this once great dog breed, not to denounce or offend those who love the breed.  My late Uncle Eddie absolutely loved German Shepherds, and because of him, I grew up around them.  In Uncle Eddie’s dogs, I saw truly great German Shepherd dogs, examples of which I only occasionally see today; a sad circumstance for those who love the breed and have had the good fortune to see them at their best.

If you want a German Shepherd and are in the market for one, if you do not take precautions, it is more likely than not, that you will end up with a dog that is nothing like the dog you expect, while shelling out thousands of dollars in veterinary care due to numerous health issues.  To protect yourself as a consumer and to be an advocate for bettering the German Shepherd dog breed, you can begin by taking the following precautions:

1.)    Absolutely do not purchase a puppy from a pet store.

2.)    If you find a breeder, demand that the breeder present OFA health certification of the hips, eyes, and heart for both parents.

3.)    Demand a state health certificate of sale signed by a licensed veterinarian prior to purchase.

4.)    Meet the both parents of a prospective litter to assess their overall physical appearance and temperament.  Avoid purchasing litters of skittish, fearful, or aggressive dogs.

5.)    Do not purchase from a litter of puppies that were conceived before either parents were at least 2 years of age.  Many congenital diseases do not manifest until as late as 2 years of age; thus in breeding them prior to this age, breeders unknowingly pass on genetic disease to offspring by breeding before 2 years of age.

27 thoughts on “What Has Happened To The German Shepherd Dog Breed?”