What Is Pancreatitis And Why Should Every Dog And Cat Owner Be Aware Of It? 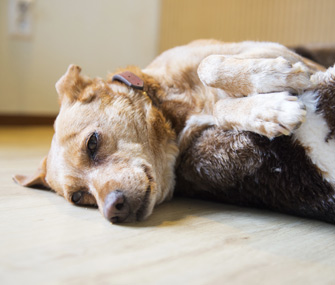 Having admitted my 5th pancreatitis case in 2 weeks yesterday, I felt the universe was sending me a message that I need to spread awareness about this common disease in dogs and cats.  There may not be a whole lot you can do to prevent a first time bout of pancreatitis, but awareness and recognition are very important in heading off this disease while it is still manageable and before very bad things happen.

Luckily for most dogs and cats, powerful pancreatic enzymes are stored in the pancreas inactive.  They activate when they enter the upper small intestine under normal circumstances once the digestive process is initiated.  In the case of pancreatitis, inflammation that leads to abnormalities in pancreatic circulation causes the activation of the enzymes while they are still within the pancreas.  The result is that the pancreas itself begins to get digested by its own enzymes.

This circumstance is bad enough when it comes to the pancreas alone, but it is not uncommon to see adjacent organ systems such as the liver and gall bladder begin to sustain concurrent damage.  Untreated long enough, severe consequences may ensue if the activated pancreas enzymes become blood born.

A severely painful and debilitating syndrome may develop where all of the body’s fatty structures are being digested, a phenomenon called Weber-Christian Syndrome.  The worst case scenario is an end stage circumstance called Disseminated Intravascular Coagulation (DIC), a severe bleeding disorder that results from severe body wide inflammation that carries very high mortality rates.

Thankfully, the circumstances outlined in the previous paragraph are quite rare when we catch the disease reasonably early.  By reasonably early, I mean within 24-36 hours of onset of clinical signs (see below).

Before we get to clinical signs and treatment, it is first very important who we identify as the highest risk for pancreatitis.  Due to inherited abnormalities in fat metabolism, toy breeds, small terriers, and Schnauzers are most at risk.   However, I have seen it in all manner of dogs, my most recent that prompted me to write this article, being a King Charles Cavalier Spaniel.

Clinical signs of pancreatitis include vomiting, anorexia, abdominal pain, diarrhea, or some or all of the above.  In dogs, it sometimes is preceded by a high fat meal, but this is not always the case and often manifests for no apparent reason.  Dehydration, shock and the potential for complications increase exponentially after 24 hours of the onset of clinical signs.

Pancreatitis is diagnosed via blood tests.  Pancreatic enzymes that are part of standard blood chemistry profiles are notoriously unreliable for diagnosis of pancreatitis.  A more sensitive and accurate blood assay is now commonly employed called a pancreatic lipase immuno0reactivity test, which is available as a SNAP test that is run in hospital within 30 minutes of blood draw.  Complete blood count and blood chemistries are also commonly run to assess for complications in other organ systems.

Treatment of pancreatitis consists of IV fluids to rehydrate the patient, restore pancreatic circulation, and flush toxins out of the blood stream and tissues.  In addition, the patient is treated with antibiotics to manage concurrent infections, anti-nausea medications, and gastrointestinal protectants.  In severe cases where Weber-Christian Syndrome or DIC is suspected, fresh frozen plasma can be administered intravenously.

Once the patient has recovered, the pet’s household needs to be very vigilant in monitoring what the pet has access to for the rest of his/her life.  Any food item that is dense in protein or fat could potentially set off a relapse of pancreatitis.  Pancreas friendly prescription diets that are low fat, low residue, and restricted in protein are very effective in preventing pancreatitis while still providing the pet with well-balanced nutrition.

One thought on “What Is Pancreatitis And Why Should Every Dog And Cat Owner Be Aware Of It?”

Can Your Dog or Cat Transmit Coronavirus?

Everything You Need To Know About Leptospirosis In Dogs

Leptospirosis is a potentially fatal disease caused by the Leptospira bacteria.  Leptospira is a cork screw shaped bacteria that effectively self-propels itself in fresh, standing water,...

In the past few years there has been a trend with no basis in science and veterinary medicine to feed coconut oil to pets. Thankfully, most cats will not eat it, but it still does not stop some...