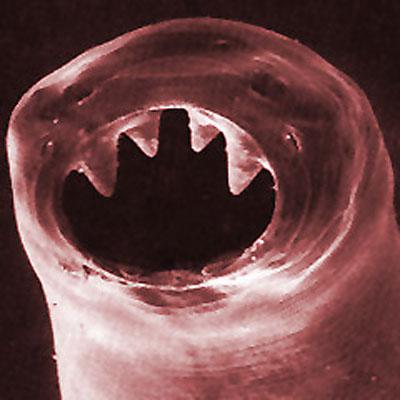 Particularly concerning are resistant strains of hookworm that we have been encountering starting here in my home state of Florida, but now spreading throughout the southeastern United States; and it is predicted that eventually those strains will be nationwide. In light of the emergence of these resistant hookworm strain, we find ourselves having to get creative with anti-parasitic cocktails in order to successfully treat them. There is even a strain that infects primarily greyhounds for which there is actually no effective treatment.

So why should pet owners be concerned about this? Hookworm is well-documented to chip away at the health of the Patient either with direct irritation of the bowel and malabsorptive syndrome , but when subclinical (meaning no direct GI symptoms), is known to chip away at the health of the patient by zapping its nutrients and reducing the effectiveness of his immune system. On the human side, hookworm can infect a person and reach a larval stage that can migrate through the skin and cause severe itchiness, discomfort and cause spider web looking lesions on the skin. These type of larvae are called cutaneous larval migrans. I have a family member who contracted this from his puppy that was infected with hookworm and it took several rounds of medication and weeks of discomfort to rid himself of the parasite.

There is also an emergence of resistant strains of giardia, a protozoal parasite that also primarily infects the gut. While giardia remains species specific and the canine and feline versions do not appear to currently have the ability to infect people, the ability for an organism to jump species often starts with the emergence of strains resistant to medication that would normally successfully treat them.

Thankfully, we have new technology at our disposal to not only highly accurately identify the presence of parasites , but can also identify resistant strains. Traditionally, most stool tests relied on a technique where ultimately the main diagnosis is obtained by a technician literally looking under a microscope and looking for eggs produced by certain worm parasites and cysts produced by certain protozoal parasites. These tests had uncomfortably high rates of false negative as high as 25%, but also did not enable us to identify specific strains of parasites. This still served us pretty well given that resistant strains of parasite are only a recent phenomenon, but now knowing that they are among us it is important to know if we are dealing with a resistant strain right out of the gate.

Specifically, instead of relying on the human element of visually searching for parasite components, we now have gastrointestinal PCR testing at our disposal that takes a human element out of the testing and makes it highly accurate. PCR identifies DNA signatures from the individual parasites present in the stool and not only finds the organism but tells us the exact strains so that we know if a patient is infected with a resistant strain; and can therefore get aggressive with the treatment immediately . It costs a bit more than traditional stool parasite screening, but in my opinion given the potential health benefits of catching these parasites strains before they wreak havoc on the health of the patient or put the human family at risk , are priceless.

I recommend that the next time your pet has a yearly well visit , ask your vet about GI PCR parasite testing instead of traditional diagnostic techniques. For a slight uptick in cost you will receive a high level of diagnostic accuracy never-before-seen and if positive, be armed with knowing the exact strain of parasite and therefore the best way to treat it.

Dr. Roger Welton is a practicing veterinarian and highly regarded media personality through a number of topics and platforms. He is the author of The Man In The White Coat: A Veterinarian’s Tail Of Love. In addition to being passionate about integrative veterinary medicine for which he is a globally recognized expert, Dr. Welton was also an accomplished college lacrosse player and remains to this day very involved in the sport.  He is president of Maybeck Animal Hospital , general partner of Grant Animal Clinic, and runs the successful veterinary/animal health  blogs Web-DVM and Dr. Roger’s Holistic Veterinary Care.  Dr. Welton fulfills his passion for lacrosse through his lacrosse and sport blog, The Creator’s Game.