You Get What You Pay For Version 2 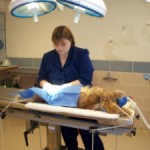 Pictured above – a state government subsidized discount spay/neuter facility actually advertising on their website one of their veterinarians exhibiting appalling sterile surgical technique with no sterile gown, cap, mask, and a surgical drape that is far too small…taken from http://www.mcohio.org/services/arc/spay_neuter_information.html

I titled this post as I did, because I have posted about this topic in the past with regard to the millennial growth of discount vaccine and spay/neuter clinics.  I was confronted with the aftermath of two unbelievably troubling cases recently that from one of those types of clinics in my local area that I felt compelled to share with my national audience, as these types of places are now present just about everywhere.

The first case was a long-time client that who had traditionally always seeked out the best possible health care for her pets.  Recent health issues of her own and expenses that subsequently arose from them had decreased her disposable income, and in the midst of that, she and her husband had a homeless Pit Bull puppy literally show up on their door step.  Ever the compassionate couple, they took this dog in, but that last thing they needed was another household expense.  Thus, rather than come my clinic for puppy wellness and spay as she normally would, she thought instead that she would give a local discount spay/neuter clinic a try.

Within two months of having been spayed, the dog was showing signs of estrus (commonly known as heat).  When she returned to the clinic where she had the spay done suspicious that there still may be female parts inside her dog causing the heat cycle, the clinic charged her for an expensive hormonal test that could check for this.  They told her that if the test came back conclusive that the dog still had female anatomy left inside her, they would refund the cost of the test and absorb the cost of going back in to get it right.

The test came back inconclusive from their interpretation of the test, so the owner was stuck with the bill for the test in addition to the “spay”, while her dog continued to go further into a full blown heat cycle.  At this point, between the cost of the discount spay and the hormonal test, the owner had paid significantly more than she would have had she had the spay done at my hospital.  What’s more, the dog was not only at this point showing the vaginal bleed and vaginal engorgement typical of heat cycle, the dog had swollen mammary glands that were secreting milk in preparation for pregnancy!

Having no further recourse with the discount clinic, the owner came to my hospital for help.  Upon review of the history, examination of the dog, and interpretation of the hormonal test, both my associate doctor and I were nearly 100% convinced that the dog had female reproductive anatomy left in her abdomen, and advised exploratory surgery.  Subsequent exploratory surgery revealed a full ovary present on the left side, half of an ovary present on the right side, and most of the body of the uterus left behind!  It was one of the worst examples of incompetence and malpractice my associate and I had ever experienced in our careers.

In another similar case shortly thereafter, a local rescue group had used this same clinic to have a dog they were fostering spayed prior to adopting her out.  One of my clients had adopted the dog well after the spay, so she had no say in where and by whom the dog would be spayed.  Again, in comes the dog to see my associate showing clear signs of heat, despite showing a clear spay scar where a spay had supposedly been done.  One hormonal work-up and an abdominal exploratory surgery later, the result was even more astonishing than the previous case I wrote of earlier…there dog was COMPLETELY intact!  100% of the entire female reproductive tract was intact.  No one had even attempted to perform a spay on this dog.

Since clinics like this do not practice general medicine, their sole stream of revenue is cranking out as many spays and neuters as possible per day, while plugging every pet they see with every vaccine available, even if the dog or cat is not at either geographical or lifestyle risk for a given disease.  They ignore American Animal Hospital Association (AAHA) and American Veterinary Medical Association (AVMA) vaccine reforms that have mandated individual protocols unique to the needs of the patient, while moving the frequency of several core vaccines to once every three years.

From a surgical perspective, they are known to perform spays and neuters on the cheap by not using endotracheal tubes to protect the airway while under anesthesia, do not use IV catheters to deliver induction agents or fluids during the procedure (not to mention delivering life-saving drugs in the event of anesthetic complications), simply put on sterile gloves rather than properly scrub their hands and gown up with cap and mask for surgery, and almost never use even rudimentary intraoperative monitoring equipment.  In these aforementioned cases, they seemed to have clearly rushed through the first procedure to the extent that it was done incorrectly, the latter not having been performed at all aside from an abdominal incision.

As in most things in life, when it comes to pet surgery – including routine sterilization – and well care, you get what you pay for.  Events like this notwithstanding, the clinic responsible for the cases I wrote of today, is currently breaking ground on its third location in my county…so apparently the word has not gotten out enough.  With places like this spreading like a plague on veterinary medicine and the pets of the US, this lack of awareness seems to be a nationwide phenomenon.  I wonder how much malpractice it will take for pet owners to finally see these places for what they really are.

18 thoughts on “You Get What You Pay For Version 2”