This past Saturday, CNN reported the story of a dog who sheltered a newborn baby that was abandoned by its 14 year old mother, in a field in rural Argentina until the boy was rescued. According to the story, a resident of rural La Plata had telephoned police indicating that he heard a baby crying in a field behind his house. The man then went outside and found the newborn infant lying beside the dog and her 6 newborn puppies.

The dog had apparently carried the baby 50 meters from the original area where the baby was abandoned by its mother, to the spot where her puppies were huddled together. Doctors remained convinced that, with an outside temperature a frigid 37 degrees, that the baby determined to be only a few hours old, would most certainly have died if not for the shelter provided by the dog and her puppies. Aside from a few superficial scratches, the baby, thanks to the shelter provided by a very dedicated canine mother, was otherwise in good shape.

As for the baby’s human mother that originally abandoned the baby for dead, she was driven by a neighbor to the hospital where she admitted that the infant was hers. The teenage mother was then promptly hospitalized for psychological treatment.

Below is a photo of the hero of the day. 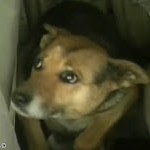 Apparently, the dog has become a local celebrity and is being hailed as a bonafide hero. However, what the future fate of hero mom and pups cannot be confirmed at this time, as CNN did not say and I was unable to find any information about this.