As those of you who were members of my website’s message boards or readers from the beginning, you would recall when I experienced the very deep loss of my beloved yellow lab July 31, 2006. Because of the transient life I spent with this dog as my education and career took me all over the country and even out of the country, the loss of Tiffany was all the more devastating, as places and people were frequently different, Tiffany was always my one constant.

Two weeks before Tiffany’s passing, a 5 month old yellow lab had come into my clinic an dinto my life with a severely multiply fractured front arm, one the owners at the time could scarcely afford to have repaired. We subsequently had the owners sign the puppy over to us for the clinic to be financially and medically responsible for the necessary surgery and follow up care. The original plan was to foster him and once the recovery was complete, to place him with a nice family – for the time being, we named him Bernie.

After my Tiffany died, plans slowly began to change. While Bernie was a beautiful, playful, affectionate puppy, the loss of Tiffany was so fresh and very distressing, I harbored the feeling that I would never again have a dog like her, and I would at least need time to grieve before I could give my all to a new dog. As such, I felt it was not fair to keep Bernie, offering him a life where he would always be compared to Tiffany, possibly not giving him love from the depth of my being that a dog as sweet as he deserved.

However, during the physical therapy period of his recovery, Bernie developed such a passionate love, attachment, and loyalty to me, that it moved me a great deal. My wife told me that his bond with me was in fact not a gradual process, but pretty much immediate from the first day we brought him home – I was just too wrapped up in the sadness of watching my ailing Tiffany decline, then stricken by the grief of her death, to notice. At this realization, I knew full well that Bernie was going nowhere else, that he had in fact found his home with us, for me to begin a new chapter of my life, with a different dog.

I still went on with the expectation that Bernie had some very big shoes to fill. As it turns out, however, he never really filled Tiffany’s shoes at all, but created his own pair to fill. While he possessed the core traits of the Labrador Retriever that I love – no leash necessary as they naturally stay at your side, very trainable, gentle, passionate water dogs, etc – he was nothing like Tiffany. Where Tiffany was very refined and regal, Bernie is a bit uncoordinated and awkward. Where Tiffany was highly intelligent, Bernie is definitely not the sharpest tool in the shed (I refer to him as my little Forrest Gump). While Tiffany was very deliberate, Bernie is a happy go lucky goofball.

The point of this story is that I see owners everyday devastated by the passing of their beloved pet. They feel as I did after Tiffany’s passing, that they will never bond with another animal like the one that have just lost. They are correct that it will never be the same, but make no mistake, when the time is right, there will be other great animals in your life that you will love for a completely different set of reasons, yet with a sense of fulfillment of the same magnitude.

As for my Bernie, I understand that he is a great gift that was presented to me at a time when I needed him the most. He is 86 pounds of unconditional, goofy love, and treats my 7 month old son with such a profound gentleness that it is moving to see. I would not trade him for the world.

Bernie When We First Rescued Him 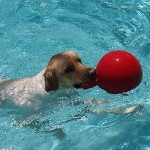 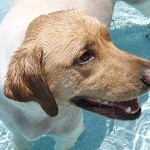