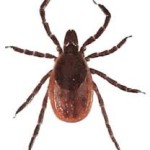 In our last stop for canine non-core vaccines (and canine vaccines period for that matter) in my preventative pet health care series, today I discuss Lyme Disease in dogs.  Lyme disease’s causative agent is a bacteria called Borrelia Burgdorferi.  Borrelia is one of a classification of bacteria called rickettsial bacteria; that are unique in that they utilize ticks as their vector to complete their lifecycle and inoculated into their definitive host.  This type of transmission is known as vector transmission.

Specifically, Borrelia is picked up following feeding on an infected dog by a tick species known as Ixodes, commonly known as the “deer tick.”  Once inside the tick, the bacteria remain in its gut and are then able to infect other dogs that the tick feeds on.  Dogs may begin to show signs of disease within weeks to months of the initial tick transmission, signs which include: high fever, anorexia, listlessness, weakness, and muscle/joint pain sometimes in one or more limbs.

Easily recognized, diagnosed, and successfully treated most of the time in areas endemic for Lyme Disease, with veterinarians frequently encountering the disease and able to effectively recognize and treat it, mortality rate for Lyme Disease is generally low.  A rare complication where kidney disease may occur due to the formation of antibody complexes against Lyme that damage the filtration units of the kidneys; may greatly reduce short and long term survival rates, but luckily this is not common.

Treatment generally begins with supportive care with IV fluids and anti-inflammatory medication to reduce fever and prevent dehydration, while giving the time for the patient to respond to the drug of choice, doxycycline.  Dogs will typically respond profoundly to doxycycline within 1-2 days, often requiring just a short hospital stay, with the remainder of ongoing treatment being completed on an outpatient basis.  Most confirmed canine Lyme Disease cases will be treated with doxycycline for 3-4 weeks.

Lyme Disease has several effective and safe immunization options against Lyme Disease.  Advocates against vaccinating think that routine vaccination is unnecessary for a disease that the majority of dogs will recover from.  Patients vaccinated against Lyme also requires a special type  of (and more expensive) blood test called PCR for suspect Lyme cases, as standard Lyme antibody tests are not accurate in Lyme vaccinated dogs (a vaccinated dog will come up positive for Lyme antibody for at least one year).

On the other hand, since illness can be severe and debilitating for the dog, expensive and stressful for the owner, many would state that it makes no sense to opt against vaccination to prevent disease in the first place.  In many Lyme Disease hot beds where deer tick populations are very high, it seems that it is less a question of if one’s dog will be exposed to Lyme Disease, but when.

I fall somewhere in the middle, having started my career in the Lyme hotbed of the North Shore of Long Island, NY, where I diagnosed 5-7 cases a month; but for the past 11 years, have practiced on the Florida Space Coast, where Lyme Disease is quite rare (2 confirmed cases in 11 years).  In Long Island, I was a strong proponent of immunization against Lyme Disease, whereas here in Central Florida where disease rates are very low, I do not.   For dogs of “snow birds” that spend winters in my area, but return to a Lyme hotbed for the spring and summer months, I still recommend yearly immunization against the disease.

There is little debate that tick prevention is a good idea when it comes to canine Lyme Disease prevention.  With 48 hours of feeding on a dog required for a tick to successfully transmit Lyme Disease to a canine host, picking the tick off or killing the tick with a veterinary grade tick preventive within this time period will effectively prevent disease.  Thus, regular administration of a veterinary grade tick preventative and vigilant physical inspection for ticks are common sense measures against Lyme Disease infection in dogs.